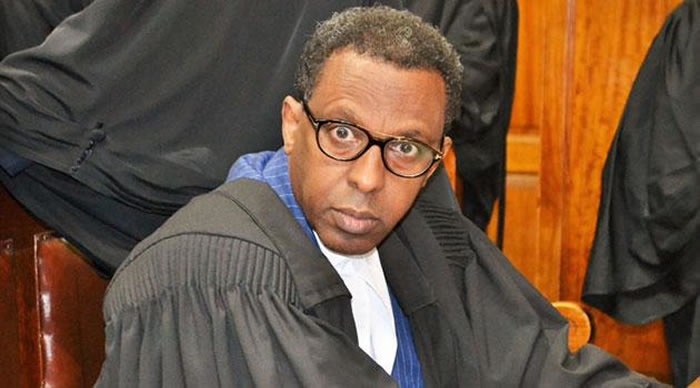 Presidential petitions in Kenya bring together the finest lawyers in the country. It’s their big stage and, of course, they relish every bit of it. The lawyers, either representing the Independent Electoral and Boundaries Commission (IEBC), or the President’s contested win, or the opposition, bring their A game as they throw legalese with abandon as they try to win their clients cases and impress the millions of viewers who follow the proceedings on live TV. Senior counsel Ahmednasir Abdullahi is one such lawyer whose services are ‘hot cake’ during such high profile cases.

The lawyer’s paycheque is attractive. The free spirited and opinionated lawyer legal fee runs in the millions. IEBC, for example, paid the lawyer Kes2.9 million per day during the 2013 presidential petition. Cumulatively, Ahmednasir pocketed kes40 million. He was among the top brass lawyers who represented President Uhuru Kenyatta in last year’s petition (read 2017). In an interview appearing on Business Daily, the Grand Mullah, as he is popularly known, told Jackson Biko why he charges his clients an arm and a leg: “ I take cases for two reasons: Because the fee is good. You know, I was taught by the late Mutula Kilonzo in the School of Law in early 1990s and he said the more you charge a client, the more he loves you. I find that to be so true”.

Known to speak his mind, the grand mullah had the temerity to call for the complete overhaul of the judiciary as the judges were corrupt, ill-educated, incompetent, tired and had no sense of direction. Retired Appellate judge Richard Kwach responded to the bare knuckle attack on November 12, 2000 by Ahmednasir by advising him to go slow on his criticism:“I think that, for his own good, Abdullahi should always bear in mind that at the tender age of 33, he still has a very long way to go and it is premature for him to claim the status of a Solomon.

Ahmednasir has been accused of intimidating judges to rule in his favor. Nairobi Governor Mike Mbuvi Sonko told off the lawyer in a long running tiff on twitter to stop intimidating lawyers. A debt collector, Mr Bryan Yongo, accused Ahmednasir of forging his papers and was therefore unfit to practice as an advocate. He claimed the senior counsel does not a Certificate of Completion of Pupilage as is required under the Advocates Act. Mr Yongo said the certificate Mr Ahmednasir to the roll of advocates was not by his supervisor Mr Peter Simani.

So what’s the net worth of lawyer Ahmednasir Abdullahi?

The First Community Bank was an idea mooted by Mandera Central MP Abdikadir Mohamed and Ahmednasir. The two brought other partners on board and were able to raise Kes1 billion to kickstart the bank. Ahmednasir is a major shareholder in the bank.

The Nairobi Law Monthly has a sizeable following for its cutting edge pieces. The senior counsel who has been practicing for over 20 years has a keen interest in media. He was a columnist with the Sunday Nation.

This towering piece of architecture is owned by First Community Bank (FCB), and that’s where FCB MIHRAB derives its name. Ahmednasir is a shareholder and founding member of FCB.

The lawyer is in real estate.

The law makes good money from his law practice. As stated on our introduction, the grand mullah was paid a cool kes40 million by the IEBC in 2013.

Other high profile cases Ahmednasir has been involved with include:

Ahmednasir net worth is over kes 250 million.

Classmates Actress June Mburu: From an Abandoned Mom at 19 to A Star Actress

Top Ten Best Private Hospitals In Nairobi And Their Contacts