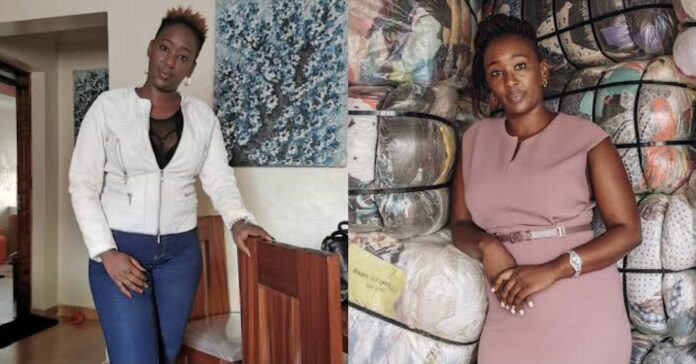 Catherine Muringo was the butt of jokes when she claimed that she bought her first car just three months after venturing into the mitumba business.

The story sparked wild reactions from Kenyans on social media, despite Cathy insisting that the business was a walk in the park by the time she got into it.

In an interview with the Standard, Cathy disclosed that she ventured into the mitumba business over nine years ago after her salon business collapsed.

The entrepreneur was devastated and feeling hopeless but was not about to give up. She used the Ksh 2,000 she was left with as capital for her mitumba business.

Her friend guided her and slowly she grew to become experienced in the business.

“I had less that KSh 2,000 as my starting capital. I was jobless and desperate, I went to Korogocho market and picked a few pieces of kids clothes which I used to stock up my empty shop then,” she said.

Cathy later met a dealer who taught her about varieties of mitumba bales, making her business even more profitable.

“I love Canadian bales because they are clean. Other than Canada, I source from Australia, the UK, very little from the US and rarely from China

“Initially, I did not know that there was a difference between China, Canadian, the UK or Australian bales, I just used to buy them randomly,” she explained.

From the kindness that she received while still new in the business, Cathy is mentoring people interested in the mitumba business especially women and widows.

The businesswoman has been in a position to mentor big names who have been running the show and making a huge profit.

“The best thing about this venture is that you can start the business with less than Ksh 20,000 capital. If you have been wondering how you can start a second-hand clothes business, you are in the right place, experience mitumba bale is your home where I will help you on how to venture,” Cathy said in an interview with Times.

She advised those who want to buy the best products, the best time to visit Gikomba is during morning hours; between 4 am and 8 am.

Cathy explained that during these hours, most bales have not been opened and you will be the first one to select the best.

Speaking recently in an interview on NTV, Cathy became the subject of jokes when she claimed that she bought her first car after just three months in the business.

She noted that she made profits from the aforementioned period and she was able to afford a KSh 700,000 car.

“Things were so good that within three months I had bought my first car. Between July and December, I had a Nissan X-trail,” Cathy said.

Richest Deejays in Kenya And Amount They Charge Per Gig