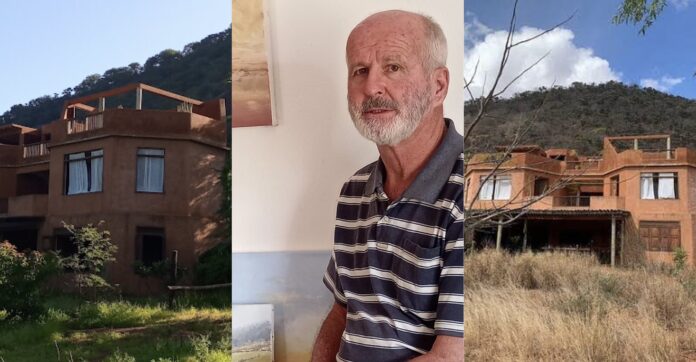 When he conceived the idea of building a house in Voi, Campbell wanted something traditional that would resonate well with its surrounding.

The four-bedroom house is now serving as an AirBnB, overlooking the scenic landscape and the glow of the Tsavo sunset.

Here is the story as told by WoK.

In an interview with Business Daily, Campbell revealed that he wanted to build a traditional house like an African hut.

However, he faced challenges on how he would put a roof on a round house forcing him to change the design, however, maintaining the concept.

“There’s also the furnishing aspect which was proving challenging. You can’t put a square bed against a round wall. So that’s why I went with an octagonal design so it gives some straight edges,” Campbell said.

The house which he named Tsavo House took him over two years to construct, and he worked with two men who handles the same.

After building the house, soil was carefully rubbed onto wet plaster by hand, just like the cow-dung technique.

The end product is then kneaded onto the exterior wall, and it can take up to seven years to be repainted.

“In Africa, a huge part of the population lives in mud constructed homes. However, developing countries are aspiring to be where the West is, yet the West is at a stage where they’re looking at sustainability and being eco-friendly, thus returning to building out of soil,” Campbell said.

Campbell disclosed that the house cost him around Ksh 3 million.

“I built the house with only two men helping me, so labour costs were minimal. I wasn’t in a hurry. It could have easily been built in four or five months,” he said.

“I dug septic tanks and water reservoirs to get enough soil to make bricks, and we added a tiny bit of cement as a binding agent

“If you do it properly, you’re supposed to cure that brick by putting it under polythene for about a month for it to gain strength over those days,” he said.

The house is available for booking on AirBnB for Ksh 4,855 per night, and it is ideal for solo travelers or a group.

It has two double bedrooms upstairs one downstairs, and by the time of writing, he was planning to put up a star bed on the rooftop.

Campbell also has an art studio sitting behind the house.

While visiting, guests can look through his collection and buy whatever they fancy, and artists can draw inspiration from his career.

The Process of Importing Vehicles to Kenya

Love Brewed In The Newsroom: Kenyan Journalists Who Became Couples

Aoko Otieno Biography, Age, Education, Career and her side of Egalitarianism