A look at his social media platforms shows that Dennis Ndwiga Nthumbi identifies himself as God’s servant, a husband, father, politician and security expert.

He is also the founder of African Dream Enterprise Movement, according to his LinkedIn page.

Nthumbi has also participated in politics having vied for the Nairobi senatorial seat in 2017, but lost to Johnson Sakaja.

Nthumbi was the point of discussion on social media for the better part of Wednesday, December 21 when he was questioned about his academic qualifications.

He was at pains to explain his academic degrees when he faced lawyer Donald Kipkorir while appearing before justice Aggrey Muchelule-led team probing the conduct of four IEBC commissioners.

During his cross-examination, it was established that Nthumbi held no degrees in his areas of expertise.

He, however, mentioned that he has certifications for the same.

“I’m an ordained reverend through the ordainment of Bishop Eric Mwangi…essentially I’m a theologian…I don’t have a theology degree,” Nthumbi said.

On his expertise in matters security, he noted that he holds no degree in the same field but he has served in the security field.

“I have served in the security field. I don’t have a degree in security studies but I have certifications

“I have not served in the military, but I have certifications of the same within my areas of professional background. And I have done operations with the military,” he explained.

Nthumbi is an ardent supporter of President William Ruto and he has been a regular commentator on political matters.

Post the August 9 General Elections, he would regularly appear on breakfast shows on major TV stations in the country.

In 2017, Nthumbi contested for the Nairobi senatorial seat using Agano Party, but he lost to current Nairobi Governor Johnson Sakaja.

Lengewa Silantoi, who ran on an independent ticket and received 31,877, Nthumbi managed 12,215 while Zacharia Matayo of the Republican Liberty Party managed 10,051 and John Wamagata of Safina received 7,300. 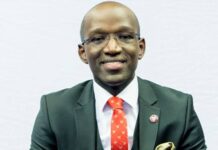 The Six Murang’a Billionaires Who Rule The Nairobi Stock Exchange

Florence Kerr Wilson: The Founder Of Wilson Airport Before It Was Snatched From Her