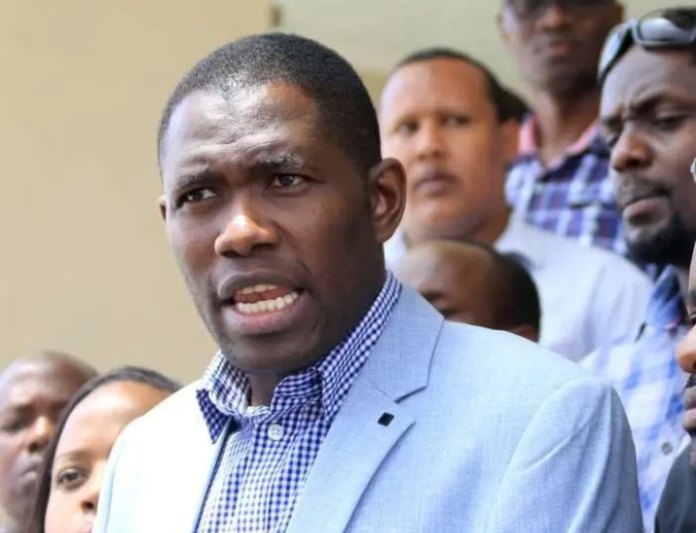 Dr. Fredrick Ouma Oluga is a medical doctor who shot to the limelight during his tenure as the Secretary General of the Kenya Medical Practitioners, Pharmacists and Dentists Union (KMPDU). He was known to put both levels of government to the task while championing for medics’ affairs.

But before that, Oluga was brought up in biting poverty. This was occasioned by the death of his father when he was barely 9 years old. His mother was forced to be the sole breadwinner of the family of 7.

Oluga hails from Rarieda, in Siaya County. He schooled at Okela Primary School, then proceeded to Maranda High School where his school fees was partly paid by the school’s board.

Oluga was a brainy boy who was among the best candidates in KCSE. He had the choice of joining the University of Nairobi but matriculated at Eldoret-based Moi University because the latter presented more opportunities to better his career.

His decision brought good tidings as his school fees was paid by well-wishers through the Mwangaza Scholarship that was funded by Indiana University. The scholarship basically supports needy students who join Moi University School of Medicine.

Oluga’s impeccable leadership skills saw him among the organizers of the 2009 World AIDS Day and also participated in a scientific conference that brought together professionals from across the globe. Before leaving Moi University, Oluga went for a two month electives studies at Providence Hospital in Oregon, US.

The former unionist has words of praise for his alma mater: “I say that is where I honed most of my skills. It was a very good school because it gave me a lot of opportunities in life.”

The medic chose AIC Kijabe Hospital as the facility of his one year internship because it is one of the busiest hospitals in Kenya. He simply eschewed the comfort zone and describes his experience in Kijabe as ‘baptism by fire’. After internship, he was posted as a medical officer in Vihiga County where his interests for cardiology was fueled given the high prevalence of Non-communicable Diseases (NCDs) in the region.

While practising in Vihiga, Oluga also enrolled for a postgraduate diploma in infectious diseases in Makerere University. In 2014, Oluga relocated to Nairobi for a master’s degree in internal medicine. He graduated from UoN in 2019.

Oluga was elected the secretary general of KMPDU in 2015. He was keen at advocating for medics’ welfare because he had witnessed the sorry state that the medical sector was in. According to Oluga, many hospitals were understaffed because frustrated doctors had taken to private practice while others joined NGOs or went for greener pastures abroad. Additionally, there were a myriad of challenges in internship, postgraduate studies and working environment.

From December 2016 to March 2017, Oluga was at the center of the more than 100 days doctors’ strike that paralyzed the public health sector. The KMPDU wanted the government to implement a 2013 Collective Bargaining Agreement (CBA) that among other things implored for better pays for doctors.

The strike left the most vulnerable Kenyans who relied on public hospitals desperate and in pain. Critics also questioned whether medics considered the Hippocratic Oath that they took.

But Oluga remained firm that the rights of doctors and patients were critically intertwined. With the government and the union at a stalemate, officials of KMPDU were taken to court where Lady Justice Hellen Wasilwa ordered them to call off the strike.

The court order did nothing to avert the situation as Oluga argued it was synonymous to negotiating with a noose around their necks. In February KMPDU were jailed over their failure to end the strike. Oluga was taken to Kamiti Maximum Prison.

Oluga says that while in prison, he offered medical services to other inmates. The worrying condition of the prison’s dispensary was something that also came to his knowledge.

“I started doing a ward round and some of those inmates I found had been there for long. They had been neglected and never had been attended to. Some of them were sick. For a moment, I forgot about the fact that I was a prisoner,” he recalls.

Oluga and other unionists were later released and the strike was called off after negotiations with concerned ministries, the Council of Governors and Salaries and Renumeration Commission (SRC).

Read Also: Pallet Cafe: The Restaurant That Employs Deaf Staff And The Entrepreneur Behind It

Oluga is the current Director of Health Services for the Nairobi Metropolitan Services (NMS). He joined NMS in March, 2020. Under his tutelage, the NMS and the national government have worked in improving and building health facilities in a move to decongest public hospitals.

However, in a classic case of a shoe being on the other foot, Oluga has been on the receiving end of NMS employed medics who have previously decried delayed salaries, failure to be employed on permanent terms and failure of promotions. In June, 2022 the medics threatened to down their tools. But Oluga was against the move, warning of consequences for health workers who would go on strike.

“Any worker who is away from work will show cause why because we have no official confirmation from the unions or the police or the Labour ministry of picketing, go slows or strikes,” he said as quoted by the Star.

Most expensive private schools in Kenya and their fee structures

Registered Nurses Salary In Kenya And Their Allowances