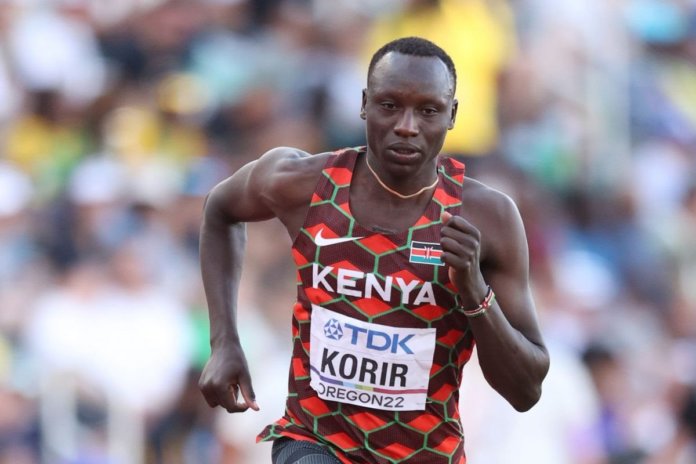 At the 2022 World Athletics Championship held in Oregon, Kenya’s Emmanuel Kipkurui Korir struck gold in a hard fought 800m race. Korir clocked one minute 43.71 seconds as he outpaced Canadian Marco Arop in the final stretch of the race. The latter who was the main threat finished third in 1:44.28 seconds.

Korir’s legs cut through the air as he dashed with his trademark head pushing style to hand Kenya its second gold.  Kenya’s youngster Emmanuel Wanyonyi put up a spirited effort but didn’t manage a podium finish after he emerged 4th.

“I’m happy, I’m grateful. You know this is a world championship title. I know it’s been hard and everyone was aiming to be a world champion and now because I am, I’m so happy,” Korir said after the race.

The world champion has now set his eyes on the Commonwealth Games that will be held in Birmingham, United Kingdom as from 28th July to 8th August. Even as it appears a tall order to break the two lap world record (1:40.91) held by David Rudisha, Korir remains upbeat that he has the capability.

Korir hails from Iten, which is a town best known to be an athletic hub which attracts hundreds of runners from across the globe. The reigning world champion was born on 15th June, 1995.

According to Tuko.co.ke, Korir studied at Kimuron Secondary School which is also located in Iten. He is currently based in the United States.

Korir was previously more interested in the 400m race than his current discipline. While a student at University of Texas El Paso (UTEP), it was clear that a promising future awaited him. In April, 2017 he emerged victorious as he finished at the tape in an impressive 44.67 seconds in the National Collegiate Athletic Association (NCAA). NCAA is an organization that is in charge of students’ athletics in the US. The same year, he improved on his pace and posted 44.53 seconds on the one lap race.

However, Korir’s coach, Paul Ereng who played a crucial role in his relocation to the US had other ideas. Ereng, who won gold for Kenya in the 1988 800m Olympics influenced Korir on changing shift to 800m. The transition was baptism by fire for Korir as he was forced to take long distance for endurance purposes. He also had never contemplated going to the gym to bulk up, yet this is what his coach advised him to do.

In 800m, Korir holds a personal best of 1:42.05 a fete he achieved in 2018 in London. It is among the fastest time in world books. A year later, Korir survived a  car accident which he described as one of the saddest thing in his life. It was a year to forget as he also suffered multiple injuries. The athlete won gold in the 2020 Tokyo Olympics in a time of 1:45.06 before his recent World Championships in which he delivered Kenya’s second gold.

Read Also: Dr. Ouma Oluga: The Medic Who Rose Like A Phoenix From The Ashes

Media Personalities Who Went On To Own Their Successful Media Companies

Chris Kirubi Net Worth And What He Owns