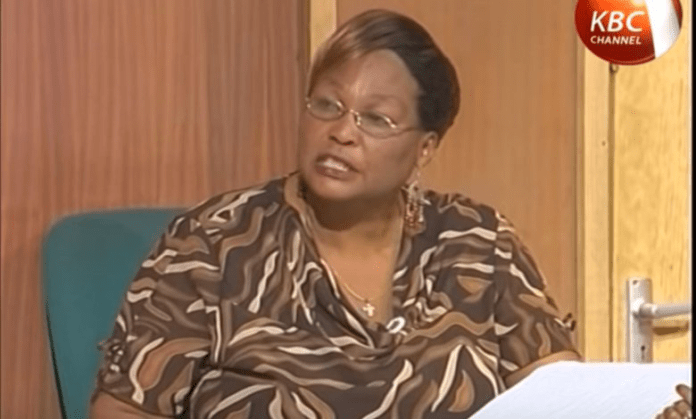 The court drama Vioja Mahakamani was for a long time one of the most popular and educative program on television. It shed light on what transpires in a court of law albeit with a touch of humour. Lucy Wangui played the role of a no-nonsense magistrate for a period of over twenty years.

In the comedy series, Lucy made rulings on a number of cases based on established laws. She listened to both sides-the prosecutor and the defendants before making her rulings.

Lucy was born in Ziwani, Kariokor, Nairobi county. Growing up, she did not think of pursuing a career in acting. According to how she was brought up, being a nurse or a secretary were considered a decent career-if not well paying. She took a secretarial course and got a job working at a bakery. The job paid a good salary.

She was introduced to acting by Mzee Pombe who convinced her to audition which she did and excelled.

The talented actress quit her well paying job and decided to venture into acting. According to an interview published on Radio Jambo blog, the actress would earn about 20/= to 40/=.

“You can’t believe that moment I can really highlight as the day I got the jackpot. I earned Sh 400!”

Over the years, she had the privilege of showcasing her talent to the late former president of Kenya Daniel arap Moi and Mwai Kibaki in national events.

Lucy attributes creativity and humility as the key ingredients that propelled her to success.

“ Through the late mzee Pombe and made tamaa’s mentorship, one of the golden things I learnt are patience, humility and creativity,” she said. ”The moment we make it in every aspect of life and decide to become big headed then it all goes to the drain,” she added. ”It’s so difficult to our generation, and when we started out, the young ones want to do it their way and that becomes the beginning of their career end.”

“When you look at Churchill, despite his success, he has managed to instill all this in his show, by giving the young and raw talents a chance to show case their gifts.”

“What the youth look for is the money but lack the patience, once they get that, then the next thing is they eventually disappear from the scenes. There is no shortcut for success, especially when it comes to art. Discipline, commitment and humility has kept Vioja Mahakamani at the summit for all these years.”

After a long run with KBC’s Vioja Mahakamani, she quit the show alongside Ondiek, Olexander Josephat (Peter Sankale) among others. The State broadcaster was keen on introducing new actors which was meet with resistance from the old faces. This prompted them to call it quits.

“When the cast of Vitimbi was told to leave due to their old age, we quit in solidarity as we are a family,” she was quoted by Nairobi Wire.

She told Nairobinews that the Kenyan government and corporates were not playing their part to support the acting industry. According to her this is the reason why other countries have a growing film industry while Kenya lags behind.

In an interview on KBC, the veteran actor revealed she has a child who had graduated from a UK university. She went on to add that she lives a decent lifestyle courtesy of her acting career.

In December 2019, she was awarded a Lifetime Achievement Award at the sixth edition of the Sanaa Theatre Awards.