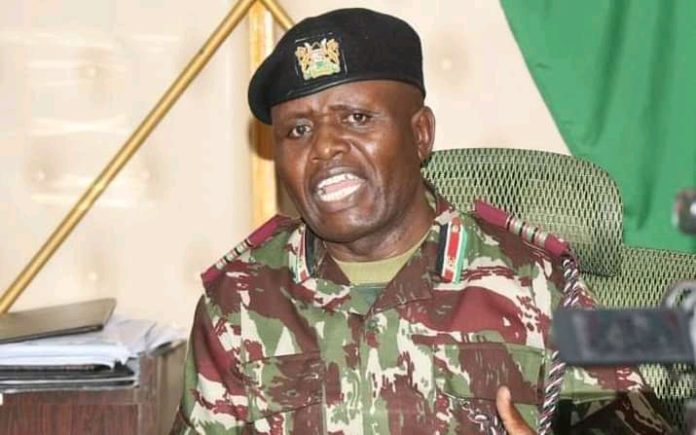 Rift Valley Regional Commissioner George Natembeya is a man who has been hitting headlines owing to the fact that his area of jurisdiction has been marred with deadly violence. Armed bandits terrorised residents of Laikipia county including launching daring daylight attacks prompting the government to involve the military to calm the situation.

According to Natembeya, the violence in the vast region is sponsored by politicians. Among  the issues the regional commander has to contend with include historical injustices, female genital mutilation, cattle rustling and perennial ethnic conflicts.

But seated in his Nakuru office, Natembeya has managed to wage a brave fight in a move to surmount some of these challenges. However, his sharp tongue has always pictured him as a controversial, rough administrator.

Natembeya is the youngest regional commissioner in Kenya and is currently 50 years old.

He is a father of 3. Two of his children are pursuing tertiary education while one is still in secondary school.

Natembeya holds a bachelors of arts and a masters of arts degree in anthropology from University of Nairobi.

He began his administrative role as a PA to the late Minister for security John Michuki. Asked whether he borrows a leaf from the latter’s leadership style, Natembeya proudly affirms.

“Everything I know, I learned from John Michuki,” he told People Daily publication.

As a DC, the 50 year old was tasked at suppressing the Mungiki gang that was terrorising residents. He had replaced Senate speaker Kenneth Lusaka. As one of his first duties, Natembeya was successful in quashing the Mungiki menace.

In 2016, Natembeya was appointed by the Jubilee government as a county commissioner in Isiolo before he was transferred to Narok.

While working in the South Rift, the little known Natembeya, was tasked with protecting the water towers of Mau.

Amid great friction emanating from a section of Rift Valley politicians, Natembeya successfully evicted over 10000 settlers. This earned him friends and foes in equal proportions.

In June 2019, he was promoted to the position of Rift Valley Regional Commissioner, a position that he holds currently.

However, he has hinted at hanging his heavy boots in a bid to become the second governor of Trans-Nzoia county where he will square out with perceived rivals including Kiminini MP Chris Wamalwa. Natembeya alleged that the electorate in the county want him to vie for the gubernatorial seat due to his exemplary service in the interior ministry.

“When doing work away from home, people see how you’ve done. So when people call you back home, you have no option but to heed to their call,” he told NTV.

Natembeya’s utterances on insecurity, FGM and early pregnancies have more often than not raised eyebrows.

In 2019, Natembeya then working as a County commissioner in Narok said that school children would have to be inspected to determine if they had undergone FGM so that their parents could be held culpable. His utterance caused a stir with teachers and anti-FGM groups warning that it was not only distasteful but the move would lead to stigmatization of girls who had undergone the cut.

In a move to disarm bandits in the volatile Kerio Valley, Natembeya, this time not mincing his words said that anyone who defied the government would have himself to blame.

“Hyenas will celebrate. There is no any other language,” he warned.

In September 2021, Natembeya alleged that bandits hiding in the Laikipia conservancy had powerful M16 rifles that were apparently more superior to what the Kenyan forces were using. He further claimed that the Kenyan government neither manufactures nor imports the M16 rifles. He however recanted his words especially after the British Army training unit refuted claims that they were the source of the rifles.

“I was misquoted, I meant that the bandits are not using arrows, spears and machetes,” Natembeya told NTV.