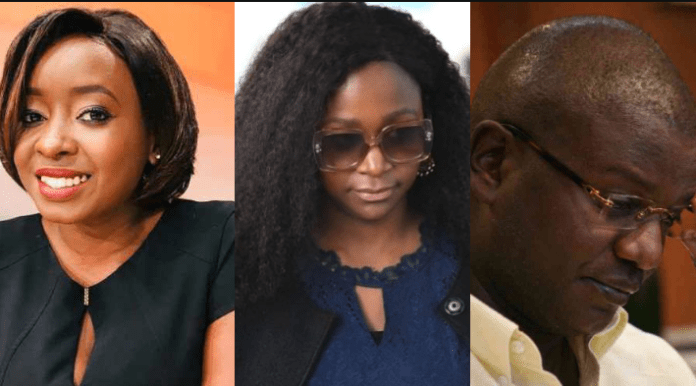 The media industry is one of the most lucrative enterprise not only in Kenya but also across borders. Also referred to as the fourth estate, these ventures earn billions basically through advertisements, subscriptions for content and endorsements.

As a profession, journalists always work around the clock to deliver news to their viewers and listeners. Most news anchors and reporters have earned fame as a result of always being on the limelight.

However, this celebrity status comes with the responsibility of ensuring that one steers clear of controversy. Besides, any happening sorrounding the lives of renowned journalists could take the twist of a news reporter becoming a newsmaker.

In this article, WoK brings you the various popular journalists who ended up battling criminal cases and mental Illnesses.

Jacque Maribe is a former Citizen TV news anchor and political reporter. She initially worked for K24 TV and Radio Africa Group. She studied journalism at University of Nairobi (UoN).

In the run-up to the 2017 general elections, Maribe traversed the country and reported mainly on Jubilee Party campaigns. After President Uhuru Kenyatta emerged victorious, he awarded her with a Head of State Commendation (HSC) amid negative reactions.

However, in September 2018, the gruesome murder of businesswoman Monica Kimani careened Maribe’s career off the rails. It is alleged that the main suspect, Joseph Irungu aka Jowie was in her company the night when Kimani was murdered in cold blood.

Irungu was Maribe’s boyfriend and the two lived together in the latter’s house in Lang’ata. According to investigators, Irungu is reported to have driven Maribe’s car and even met her after the murder of Kimani. In May, 2022, investigators traced 7 phone numbers including the ones belonging to Maribe and Irungu to the crime scene.

With Maribe being thronged into the center of the gruesome murder, she was forced to resign from Citizen TV. The murder trials are still in court.

Former KTN news anchor Esther Arunga became an eye of the storm after she married Quincy Timberlake in 2010. The matter hit headlines especially over the controversial Finger of God church that was associated with the duo but was largely seen as a cult.

Arunga’s parents were against her move but she is reported to have sued them for a colossal amount in a move to keep them at an arm’s length. The budding fairy-tale love between Quincy and Arunga saw them relocate to Australia as a way of fleeing ‘bad publicity.’

However, in 2014, the death of their son, Sinclair Timberlake raised questions as Australian authorities moved in to investigate the controversial death. An autopsy indicated that Sinclair was hit by a blunt object, contrary to what Arunga had indicated. She is reported to have said that her son fell on the stairs.

Later on, Arunga admitted to lying to the court and confessed that her husband pressed the son against the wall in a way of ‘exorcising demons’. She said that she initially gave false information for fear of being lonely and was protecting her husband.

In 2019, Arunga was sentenced to 10 months with immediate parole as a result of being an accessory to manslaughter.

Michael Oyier is a renowned former news anchor who worked for KTN between 2002 and 2012. Prior to this, he worked at Capital FM when he was still pursuing an undergraduate degree in psychology at United States International University (USIU).

However, Oyier opened up on how he found himself in the doldrums for 7 years. He said that the reason for his depression might have arisen from unresolved mourning following the passing on of his parents.

For the said period, Oyier stayed in a ‘lonely, dark place’ though he would still go to the studio and read news.

“The other thing was (you know) pulling yourself up and go to work and execute another bulletin and go and mcee another job and then meet those courageous people who came for counseling when their counselor really needed some help too,” he told Engage Talks.

Fortunately, he reached out for help and managed to pick himself up. Currently, he works as a counsellor at Serenity Group and is also a professional events MC.

Kimani Mbugua, a former Citizen TV journalist was propelled to celebrity status with his popular broken news segment where he went to the streets and asked people random questions. The Moi University alumnus’ media career was like a rising star until his battle with psychosis dimmed his profession.

Lately, Kimani has confessed that what began with smoking marijuana ended up with psychosis and necessitated his admission to various psychiatric units.

Kimani is currently working on authoring a book and is contemplating studying psychology due to the experience he got while in mental hospitals.

Louis Armstrong Otieno is thought to at one time the highest paid news anchor in Kenya. He previously worked for KBC, K24, Citizen and KTN.

With the big pay, he lived a lavish life characterized by high end cars and stayed in prestigious estates in Nairobi. However, Otieno fell from savoring life to enduring tough times especially after he fell sick with a pancreatic infection that took away his hearing ability. He fell into depression and ended up dead broke due to hospital bills. In one interview, Otieno was forced to respond in writing due to hearing impairment.

“I cannot even hear my own voice (holds back tears) . I cannot hear my daughter when she comes home from school.”

He appealed for help from Kenyans at a time when even his close friends had gone silent on him. Luckily, he went for surgery at a city hospital and regained his hearing ability.

The renowned media practitioner left the fourth estate to take up a communications job at Nakuru County. Sadly, his earnings reduced which forced him to try out a few ventures.

All his businesses crumbled like a house of cards. This left Kimani indebted to various creditors. Due to his separation from family as his wife resided in Nairobi, Kimani’s marriage also hit headwinds prompting divorce. As he battled depression, Kimani once attempted suicide using a mosquito net.