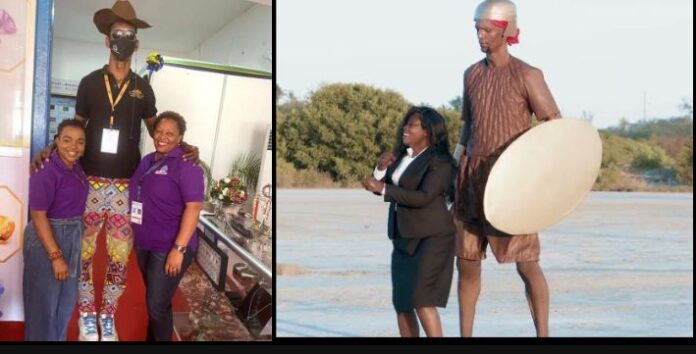 After featuring on Rose Muhando’s latest hit ‘secret agenda’, a lot of questions have been asked about the identity of the towering man who dwarfed everyone in the video. A number of people even inquired whether he was real.

The man who has become a magnet for attention is Julius Charles. He is a 28 year old Tanzanian and tops the chart of the tallest men on earth. Nicknamed ‘The Giant Julius,’ he stands at 2.6 metres tall. According to him, he wears shoes size 55, his waist circumference is 44 and his T-shirt size is XXL. This huge size has led to a number of challenges.

“Travelling is a big challenge for me, same to clothing which I have to order from abroad,” he said in a past interview.

Charles’ body built has earned him fame and misfortunes in almost equal proportions.

Charles grew up in Mwanza. He is the second in a family of 7. According to a past documentary by Afrimax, he weighed 22 pounds (10kgs) at birth and was probably delivered via a caeserian section.

When he turned 13, Charles had grown taller than his peers and was a centre of attention for school going children.

“I was shockingly growing bigger and had surpassed my older brother and friends,” h says.

Dropping Out Of School Because Of Rejection

When he joined college, Charles’ education dream suffered a huge blow as many tertiary institutions turned him away. Apparently, this was because of his height would distract students.

“My growth brought me lots of disadvantages especially in college. By then I had grown very tall so I was forced to quit school because I had already become the college’s breaking news.”

“Wherever I was, scholars were staring at me with shock expressions on their faces. For that reason, many schools rejected me because I had become like a distraction,” he said.

Charles would later meet a man who was looking for talented youths and recruited him to go and play basketball in Dar Es Salaam. Due to the power of social media, he went ahead and travelled to the U.S to play the game.

The Tanzanian flies on business class due to his height. His celebrity status has also earned him channels to eke a living. He has starred in a number of action movies and is a brand ambassador for various companies.