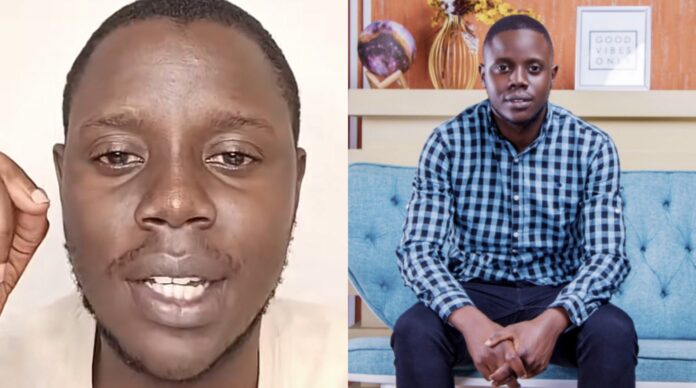 Llewellyn Ouya who now goes by the moniker, Mr Know It All, is among Kenya’s top-rated TikTok content creators.

The soft-spoken financial consultant commands a following of over 150,000 people and over 2 million likes.

Recently, Ouya revealed how he made Ksh 400,000 within months on the social app, thanks to his fans who are drawn from across the world.

Here is the story as narrated by WoK.

In 2021, Ouya started creating content and sharing it on TikTok mainly to impart financial knowledge to his followers.

He would make videos about a series of financial  topics such as saving, investing on a particular business and budgeting.

When he started doing TikTok videos, Ouya first shared numerous business ideas which people can start with a capital between Ksh 10,000 to Ksh 50,000.

The videos about investing and budgeting went viral and later, his fans started asking to be tagged in specific videos.

However, on TikTok, tracing a video is hard unless one saved it, for this matter, Ouya decided to compile information from the videos into an eBook.

The content creator wrote the eBook and started selling it to fans. The eBook contains 50 business ideas in different categories

He went ahead to market his new eBook by making a video explaining content of the copy and how people can get it.

The video went viral on the social platform and garnered over 70,000 views, with Ouya selling six copies on the first day.

He would receive orders from his fans residing in Kenya and those in diaspora, especially from the Middle East.

Ouya noted that the success of the eBook surpassed his expectations.

“When writing the book, my goal was to sell at least 20 copies per week, however, it reached a point where I could sell more than 20 copies in a day,” Ouya was quoted by Bizna Kenya.

On the first month, the TikToker sold over 2,000 copies. With the sales increasing, it reached a point where he could no longer keep track of the transactions find the eBook.

Ouya later launched an e-commerce website where people could access the copy and had it on e-commerce platforms, a move that increased sales of the book.

The TikToker noted that he has tried business before but no business had huge returns and profits as the eBook.

He also advised budding entrepreneurs not to overthink about business ideas.

“Mine was just a flash idea, I just thought that since these business ideas were not greatly in demand, why not capitalize on them?

“I never expected this kind of success. I expected to sell the book for a maximum of one week and that the sales would taper off,” Ouya stated.