Nizar Juma is a man who should be emulated by Kenyans for remaining steadfast in fighting the cancer that is corruption. Even in old age, the mogul who has been setting the bar high since his glory days, shows no signs of stopping.  In 2019, aged 75, he was the chairman of Jubilee Holdings and 70 other corporations spread across various industries, such as textiles, energy, telephony, fibre optic cable, pharmaceutical, and food processing.

His experience in the world of business spans more than five decades. Back in 1974, he signed a franchise with Adidas to supply balls and kits to 49 countries in Africa. Having ventured into business in 1968, the highlight of his career came in 1978 when he was put in charge of supplying balls during the FIFA World Cup.

His acquaintances describe him as a seasoned entrepreneur, serial board chairman, and a man of integrity.  In September 2017, he founded The Blue Company Project which seeks to ensure organizations are corruption-free. According to Mr Juma, the project seeks to re-engineer how Kenyans think about corruption.

“People in business say if you can’t bribe you can’t survive but I’m saying, no, you’re wrong. You can. We want to make corruption-free and fashionable again. Today our children are growing up saying, “If you can make money very quickly through corruption, why work hard?” he told Business Daily Africa.

Despite all his success, when asked what he would like to be remembered for by Jackson Biko-the answer was “Nothing”.

The serial board chairman was born in a humble family in Uganda. He attended primary school in a little-village known as Masaka in Uganda and thereafter headed to Kampala for secondary school. He would then go on to acquire a BSC (Econ), Joint Hons, in Economic, Law & Accountancy,  Business Administration from the University of Wales, UK.

Having been in business since the 60s, Nizar Juma discovered that money was not the definition of success. At 46, he realized there was more to success than money and a decade later he retired as a businessman. However, this did not stop other opportunities from knocking at his door. He would go on to be appointed to different boards and he still serves with some of them to date.

The Managing Director of Adidas Teamsports Limited and Group chairman of Industrial Promotion Services Limited has served on the following boards:

Mr Nizar Juma is a man who is content with what he has. He made this clear in an interview with the Standard:

“I am not like those businessmen who have a lot of money until they don’t know what to do with it. I am not so rich that I don’t have to worry. All my children are settled, self-sufficient and doing their own business,” he told the publication.

“That is a blessing. I am happy. I sleep at night. There are no contracts. There is nobody holding me here at Jubilee or anywhere else I serve. I can walk away tomorrow. I am free.”

Also Read: The Billionaires Who Were Behind Text Book Centre And Sarit Centre

1982: the late retired president Moi awarded him the Silver Star of Kenya for his outstanding service to the nation.

2013: The late H.E Mwai Kibaki awarded him for Selfless Service through the Asian Foundation.

2014: British Minister for Energy and Environment awarded him the Bharat Gaurav Lifetime Achievement Award at the House of Commons.

2015: received acknowledgment as one of the 100 Leading Global Gujarati Leaders Personalities in the volume Jewels of Gujarat

The successful entrepreneur got divorced in 1992 and has never remarried. When asked in a previous interview whether he misses love, he said he was self-sufficient. He is a father of three children who reside in Australia, the US, and the UK and has seven grandchildren.

“I think the ending of any marriage is always traumatic. But I decided marriage was not something I would pursue anymore. I decided my life was okay without a partner,” he told the Standard. 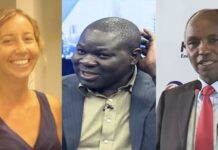 Dr. Maria Othieno Bayerl: From Being Labelled A Monkey To Becoming Top Surgeon In...

Top Hotels In Machakos & Their Owners