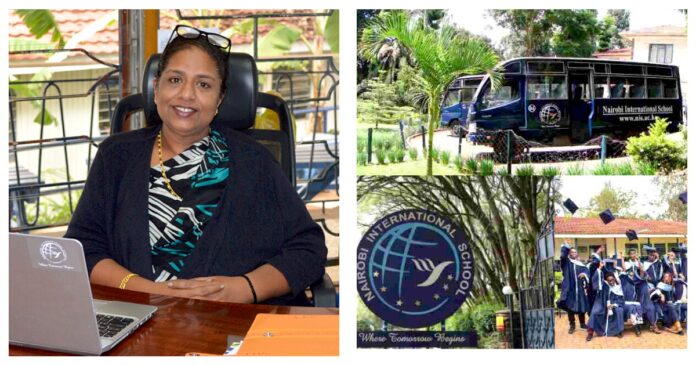 Radhika Lee is an enigma whose strength, courage, and determination to impact people’s lives led to the formation of the Nairobi International School. The dream to have an impact on others developed when she was six years old and was fulfilled after years of hard work and pain. Before the foundation of the school, she impacted the lives of many as a teacher even though she was living through a nightmare in her personal life.

This is her story as told by WoK.

Though originally a Hindu, Radhika spent 16 years of her life with Catholics and learned to embrace their faith. Armed with her academic papers and determination to find a job, she moved to Kenya in 1986.

Back in India, she had taught at a private college and hoped this experience would come in handy. She secured a teaching job in Mombasa but found the environment to be unfavorable for her. After six months she resigned from the position, and moved to a school in Ongata Rongai.

But the environment was even more unfavorable compared to the first, forcing her to resign three months into the job. After months of struggling to find a job, she was employed as a teacher of English at Arya Samaj Schools where she spent four years. At the school, she rose to become the head of the department of English and took students to the annual secondary schools music festivals.

After leaving, she needed something that paid more hence she went to several interviews. Finally, she was hired at St. Austins Academy where she served as a teacher for a decade and a half. Thereafter, she became the head of the school at Jafferey Academy for four years.

After more than two decades, she felt it was time to start her own school. This was in spite of the fact that her marital life was falling apart after years of violence. The dream to open the school further stalled as bank after bank denied her credit since they felt her venture was too risky.

While sharing these hurdles with a friend on one particular day, the friend informed her about GroFin, a venture capital that helped small medium sized companies with capital. To receive funding from them, she had to register her company and partner with someone. The venture capital firm also asked her to raise Sh65 million out of the needed Sh130 million.

She partnered with her son and went back to India to mortgage her home in order to partly raise the money. Then, a number of parents from schools she had taught came forward and helped her raise the remaining amount. With this done, GroFin helped her with the remaining amount. When she thought everything was done, she faced yet another problem when powerful people began fighting the establishment of the school in the Lavish Lavington area.

Their disapproval was no match to her determination and in September 2008, she opened Nairobi International School as a senior school with 35 students. Being the first school in the country to introduce e-learning made her stand out from competitors and got her a lot of publicity including from Apple Inc. In 2011, she opened a preparatory school and a bit later a kindergarten.

Radhika found an outlet for her pain through prayer and writing what she was going through. She wrote when her husband first hit her and also penned about the painful ordeal when her mother passed away leaving her feeling very lonely.With time the journals became a book which she wasn’t sure about publishing.

When she accidentally ran into Jeff Koinange at Heathrow Airport, he encouraged her to publish her journals. Her book ‘Rainbows in My Cloud‘ was released in 2015. Through the book, she tells how she arrived in Kenya and a few years later, her husband followed her. At the time, they were not married but her parents did not approve of him even while they were in India.

The first time he hit her was when she was five months pregnant with their son and could not prepare a meal that had been requested by her husband’s friend. It was late in the night and she had already prepared dinner.

This would be followed by years of abuse where workers would save her life twice. In the book, she revealed that she was beaten, had her hair pulled out, endured as her husband professed her love for another woman and even beat up her father.

The last incident happened in 2006 when reportedly the house help found him trying to strangle Radhika with a rope he had made out of her clothes. Prior to this, he had moved out of the house as he had fallen in love with another woman. On that particular day, he managed to find his way back to their Westlands home and tried to strangle her. The help pushed the drunk husband who lost balance and fell
giving her mistress time to escape. This was the final straw and the two went their separate ways.

“Twenty years of love, pain, violence and endurance came to an end that afternoon. It was time. I knew it. I had given our marriage more chances than it deserved. Not anymore. It was done. I was done,” she wrote.

Even after all this, she still tried to help him and paid his the bills he had accumulated in different places. It was hard for her to let go as she had promised to love him and never leave him. When it was all said and done, she was left with no hard feelings towards her ex-husband. 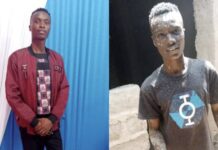 Saeed Abdirahman: The Poor Boy From Mandera Who Dared Chase His Dreams Now Own...

Duncan Kobetbet: From A Watchman Earning Sh5,000 To Establishing Security Company With 200 Employees

From The Slum Dwellers To Becoming Movers And Shakers In Kenya