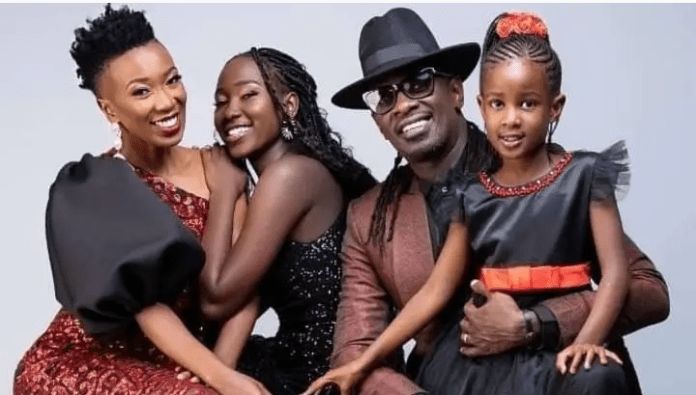 Rosemary Wahu Kagwi is a celebrated musician and entrepreneur whose life journey and accomplishments are simply adorable. The eloquent songbird is the proverbial beauty with brains as she also has an outstanding curriculum vitae behind her name. WoK brings you Wahu’s comprehensive biography.

Wahu is the last born in a family of 5. Her mother, Lucy Kagwi is a retired banker.

She is married to musician David Mathenge popularly known as Nameless. Unlike many other celebrity couples whose marriages hit dead ends, the duo have been in matrimony for 17 years.

They first met in the late late 90s when they were both students at University of Nairobi. Their amazing love story was fueled in an event which Nameless performed exceptionally well and this prompted Wahu to pat his back thereafter, commending him for the fulfillment.

The Mathenges dated for 8 years before walking down the aisle in September 2005. Their private wedding was estimated to have cost a million shillings and was organized in the shores of Lake Naivasha.

Wahu and Nameless are blessed with 2 daughters: Tumiso and Nyakio aged 15 and 9 respectively. Lately, the couple have revealed that they are expecting another child.

The musician was born in Parklands and attended Hospital Hill Primary School. She was among the top performers and was also good at debating and recitals.

Wahu then proceeded to Precious Blood Riruta. However, unlike in primary school, her academic performance was below average as she revealed in a past interview. It was a matter that moulded her hardworking and enterprising nature.

“PB (Precious Blood) taught me to push myself a lot and that’s something that today I carry,” she says.

She left an indelible mark by writing her first song called ‘Showers of Blessings’ while in high school. The song was meant to celebrate top academic performers in the institution and is still imprinted in the culture of the school.

Read Also: 40 And Above: Kenyan Female Celebrities Who Are Ageing Like Fine Wine

While at UoN, Wahu pursued a Bachelors of Arts in Mathematics. She also holds an MA in communication.

Initially Wahu was only interested in music as a hobby and did not consider it as a career. In 1996, her brother was infected with tuberculosis and she resolved to compose a song for her as a way of love.

While in campus, she was a backup singer for various musicians. In 2000, she released her first singles ‘Niangalie‘ and ‘Liar‘ while she was still studying.

During the maiden days of the new century, the entertainment industry wasn’t very lucrative. However, after their much publicized 2005 wedding, Nameless and Wahu saw their career take a meteoric rise.

In 2007, Wahu released a major hit, Sweet Love which was meant to celebrate her first born. The song propelled her career further. She is also behind a gospel song Sifa which was released in 2017.

According to her, the surprise move was because of a self reflection of how her faith. Wahu said in a past interview that she had many of her friends advising her to go for the gospel genre.

“It was a reflection of a very internal, personal journey with my Lord and Savior. The more I spent time in His presence and pray, the more I feel convicted in the kind of music that I release,” she told Betty Kyallo.

Wahu has worked as a coordinator at Mkenya Daima. The organization was founded in 2012 to ensure that Kenyans live in peace especially after the infamous bloodshed of the 2007 post election violence.

Wahu has previously worked as a model and she owns beauty salon known as Afro Siri.

Read Also: Simon Kachapin: The Ex-Teacher Giving Lonyangapuo a Run For His Money

Teachers Among Those Who Face Salary Cuts Over Coronavirus

Why 2013 Demio Is Popular With Kenyans