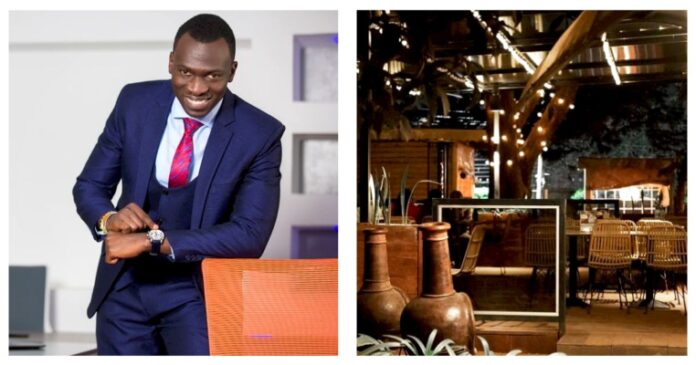 Having a side hustle has never made sense to journalists until now. Leading media houses are firing their top media practitioners with abandon. This has seen quick thinking journalists like Trevor Ombija enter the world of business. He co-owns the Ksh60 million Samaki Samaki restaurant in Kileleshwa along Othaya Road.

Here is a look at the multi-million restaurant as told by WoK.

According to the news anchor, he is the majority shareholder. Trevor told a local blog that he started the restaurant “almost one and a half years ago and officially opened in December. We are just the two of us but I own most of it.

“It was quite an expensive venture. I don’t own the land, it is leased. (The restaurant) is estimated at Ksh60 million,” he stated.

They took a loan from a local bank which enabled them to start construction in 2021. The restaurant was opened in December the same year.

In an article appearing on the Daily Nation, food at the establishment is quite expensive. According to the daily, lobster is Ksh2,900, tilapia goes for Ksh1,200, king prawns Ksh2,900, tuna goes for Ksh1,850. These are minus sides, which are charged separately.

Beer goes for Ksh500 while cocktails range from Ksh700 to Ksh1,200. In a separate interview, Trevor told Kenyans that they also serve

“……kienyeji (indigenous) food but other popular dishes are made of chicken, lamb chops and mbuzi (goat meat). We also have Ugali,” he told the local daily.

The space is beautiful and the indoors are cozy. It has a bar which has a series of lampshades that look like small upside-down bamboo fishing nets which come alive at night when they are lit.

Samaki Samaki is renowned for its jazz music. However, it has come under sharp criticism for playing loud music in a residential area.

Former beauty queen Emma Too came out gun blazing when the Citizen TV news anchor accused her of orchestrating attempts to shut down Samaki Samaki over noise pollution.

We reduced our volume completely all other neighbours were ok with our attempts, except her so I offered to go the extra mile of soundproofing as a last resort she still refused,” he stated.

Trevor went on to state that efforts to soundproof her house hit a brick. Responding to the reports, Emma wondered how a split level house could be soundproofed.

“Now, how do you soundproof a split-level house and not the actual club?! What will other residents do? Will they also soundproof the whole street?  Turn down the music and stop parking at my house,” she wondered.