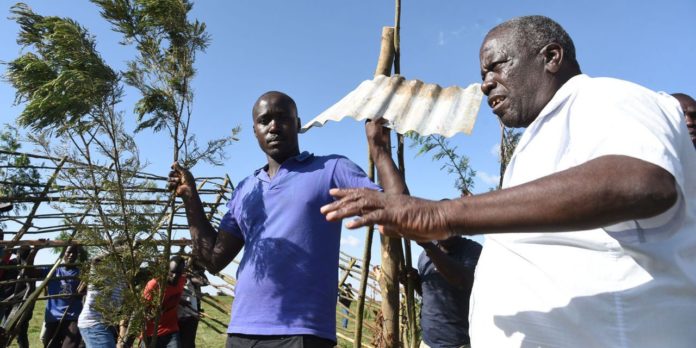 Police officers have been camping at a piece of land linked to departed Kanu era politician Mark Too in Eldoret.

The officers were sent to the 25,000-acre piece of land following a recent incident where some squatters attempted to forcefully occupy the land.

The squatters have been embroiled in a heated court battle with Too’s family over the ownership of the land that sits near Eldoret International Airport.

Officers were called in to guard the property after the squatters who have laid claim stormed the property for a third time in a row.

Police officers were forced to fire several bullets in the air to scare away the squatters who claimed to have been awarded the land by the court.

According to Benjamin Rono, the squatters were given custody of the land by the Land and Environment court in Eldoret .

During the Friday incident, police officers tried to being down temporary houses built by the squatters but they would hurl stones at them.

The officers were forces to request for back up to eject the squatters.

“We will not relent in our bid to reclaim ownership of this land. This is where we call home and no amount of force will make us give up,” one of the squatters siad.

Tanui said the 1,000 families had been living on the farm for over four decades and it was unfair to be displaced without being given an alternative place to settle.

Wilson Kiprugut Chumo: The First Kenyan And African To Win A Medal At The...

Deborah Nduku: Founder Of The Only Greek Yoghurt Manufacturer In Kenya