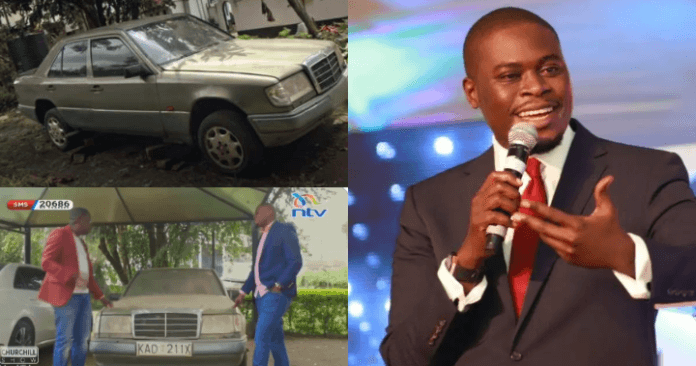 Nairobi Senator Johnson Sakaja has become an eye of the storm over his failure to successfully complete an Actuarial Science degree at the University of Nairobi (UoN).

With the phrase that the internet never forgets now coming in handy, the matter is even more confusing considering Sakaja is on record giving contradictory statements on why he never completed his studies. On one hand, he recently alleged that he was unable to complete his undergraduate studies because he was cash-starved hence dropping out of UoN for lack of school fees.

However, one year ago, Sakaja had divulged to comedian Daniel Ndambuki popularly known as Churchill that he was a man of means while still in campus.

Sakaja said that his involvement in national politics during President Kibaki’s tenure brought on good tidings: a Mercedes Benz car, multiple businesses and an apartment. He achieved all these milestones while still a student. While in fourth year, Sakaja detailed that he was able to earn approximately 5k daily from his ventures.

“I had a salon, laundry and barbershop. In Chiromo I had Goshen laundry. I used to wash guys’ clothes and by the end of the day I had like 5000 shillings.”

“We established the Vijana na Kibaki Initiative and started mobilising youths in universities and that is how I bought my first car, a green Mercedes Benz,” said Sakaja.

The said car, with registration number KAD 2** X, is a Mercedes Benz W140 which is currently said to be grounded and parked outside his Kilimani residence. According to Sakaja, it was initially owned by Moses Wetangula.

Sakaja is said to have acquired it in 2007 at Ksh 500k. According to various sources, the year of manufacture for the salon car is between 1993 and 1998. The vehicle is known for its durability and is still considered a luxurious car if it had been well maintained.

In 2018, Sakaja came to the rescue of a man who had been dumped by his fiance for being broke. He gave out a Lexus LX 570 that was used for the man’s wedding.

Read Also: We Do Not Make Millions From Our Snake Venture; Inside What It Takes To Run A Snake Farm

The vehicle is a fuel guzzler that is associated with the few who ride life from the fast lane. It is a plethora of luxury and safety. Its V8 engine is rated 383 HP. Because of its sunroof, the high-end vehicle is suitable for politicians as it can navigate in rough terrains.

A number of safety measures for the SUV include fire extinguisher nozzles next to the tires, heavy and thick exterior and sorround view camera system.

Stephen Ogweno: CEO Of Stowelink Inc Who Founded Startup While In Campus

Wilson Kiprugut Chumo: The First Kenyan And African To Win A Medal At The...