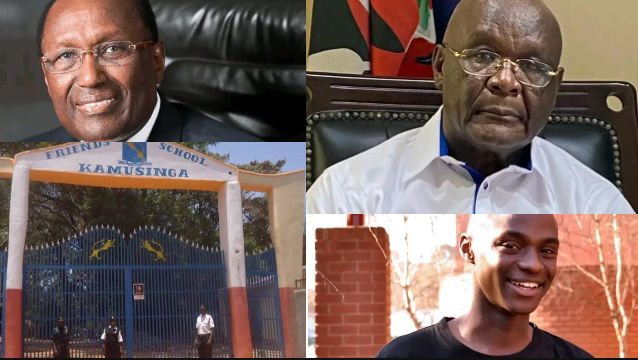 As an institution, Friends School Kamusinga continues to be among the most admirable schools in Kenya. This is due to the fact that the school not only posts exemplary academic results but also excels in extra curricular activities. The school has also produced great entrepreneurs whose business acumen has created jobs and earned them recognition.

Here is a list of great entrepreneurs who schooled at FSK as told by WoK.

The late Chris Kirubi attended Friends School Kamusinga. In 2011, he was ranked the second richest person in Kenya and 31st richest in Africa by Forbes with a net worth of $300 million (over Sh30 billion). He had interests in real estate, media and finance and at the time of his death was still one of Kenya’s richest billionaires with an estimated net worth of Sh 20 billion.

Ambassador George Sirengo Masafu is the Kenyan ambassador to Democratic Republic of Congo (DRC). He is a proud alumnus of FSK and has been instrumental in giving back to the institution through the school’s old boys association. As an entrepreneur, Masafu is a partner of West Media which has a substantial audience in Western Kenya, North Rift and Eastern Uganda. The media house segments are West FM radio and West TV.

Mubarak Muyika is a young techpreneur behind Zagace which offers software based services to its clientele. Muyika was orphaned at a tender age but developed the enthusiasm for entrepreneurship and technology. He participated in the Kenya Science and Engineering Fair contests while at FSK.

Aged 16, Muyika threw his hat into entrepreneurship by incepting Hypecentury. The firm provided affordable web design and digital services for small enterprises. Later on in 2013, he founded Zagace which offers enterprises with app-based services. According to Biznakenya, the company currently has clients in more than 60 countries and has a turnover of over $2 million.

Muyika turned down an opportunity to study at the prestigious Harvard University because he wanted to concentrate on his venture. It is one thing he doesn’t regret over as his resolve propelled his entrepreneurship dream.

“I felt like some of my peers already had raised funds, already had employees and they were already competing. It would take me 5 years to actually catch up with them,” he said over the Harvard scholarship.

Joel Mwale’s story is a true definition of rags to riches. He rose from a school dropout whose family couldn’t foot school fees to an entrepreneur who sold his business for over Ksh 42 million.

Mwale founded Skydrop, a company that purified rain water then sold it as bottled water. But before this, he didn’t have funds to kickstart his business necessitating his to sell a piece of land to finance his dreams. The company sold half a litre of water for ksh 17 and a litre for ksh 31 as its sales gradually began escalating to the tune of millions.

In 2013, he sold his 60 per cent shareholding in SkyDrop to a group of Israeli investors for over Ksh40 million. By that time, the company was generating annual revenues of Ksh51.5 million with 74 employees.

Stephen Machua: Invested Ksh250k In Farming Only Got Harvest Worth Ksh9K, Business Journey Of...