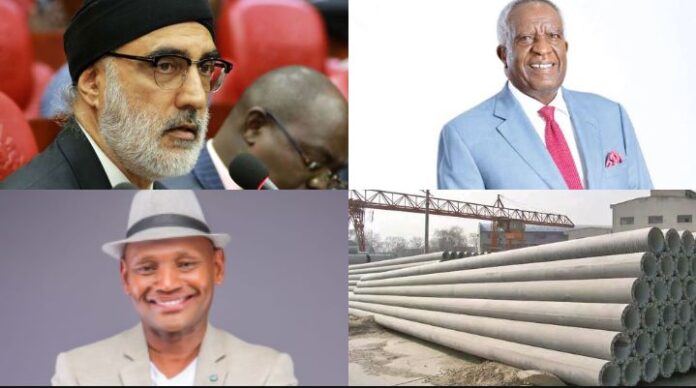 With the government’s agenda to enhance distribution of electricity in Kenya, there has been a rise in demand of both concrete and wooden poles. However, with concerns of environmental protection and amid a ban on logging, the Kenya Power Company has lately resorted to use of concrete polls more than the wooden ones.

The supply of poles to the power distributor has seen some intricate billionaires and companies win multimillion tenders. As established by the Daily Nation in an article dated 4th October, 2020 some of the serial businesspeople who have previously supplied poles to Kenya Power are Jaswant Rai, Peter Munga and former Thika Town MP Patrick Wainaina. In this article, WoK reveals the multimillion tenders and the persons and companies behind them.

Billionaire Peter Munga hails from Kangema in Murang’a and is credited with overseeing the enormous growth of Equity Bank from a small firm that was initially interested in offering mortgages to low income earners. Munga served as the chair of Equity Bank until 2018. He is also linked to Equatorial Nut Processors. According to the Daily Nation, Munga’s firm, Greystone Industries Limited won a ksh 35 million tender in supplying concrete poles to Kenya Power.

The Rai Group which has diverse interests in cement, sugar, wood and paper manufacturing is a family owned conglomerate that is linked to Jaswant Rai. The family’s patriarch, the late Tarlochen Singh Rai, left the execution of his will in the hands of Jaswant Rai. Rai Group is reported to supply approximately half of the sugar consumed in Kenya. In 2020, Rai Cement won multiple tenders worth ksh 43 million and 70.13 million to deliver concrete poles. According to Business Daily, Timsales, a company owned by the Rai Family also bagged a tender worth ksh 112.87 million to supply treated wooden poles to Kenya Power.

Former Thika MP Patrick Wainaina Jungle is an astute businessman who broke the glass ceiling through exporting nuts via his Jungle Nuts company which has employed over 2000 people. Wainaina, owns Jungle Energy (K) Limited which provided poles worth ksh 40 million in 2020.

Yash Poles was incorporated in 2012. It has interests in manufacture of concrete products in the East African region. The company, owned by Darshil Kamal Shah and Savan Kamal sold poles worth 57.4 million to Kenya Power.

The company is headquartered along Riverside Drive in Nairobi. It has spread its tentacles in the East African region and works with governments especially in setting up power infrastructure. This include construction of transmission lines and substations. The firm won a tender worth 30.7 million.

Teen Invents Alerting Device For Women That Is Worn Like An Earring, Captures Photos...