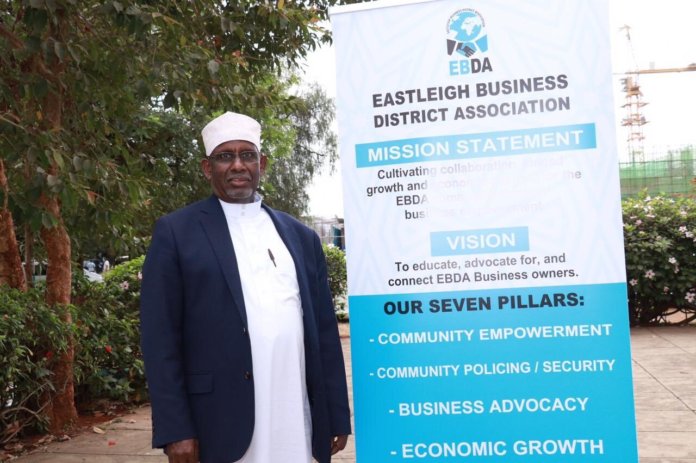 Ahmed Abdullahi Yare is an Eastleigh-based Kenyan businessman who also owns Yare Towers and Yare Plaza in the heart of Eastleigh.

Yare is a respected man among the Eastleigh business community and is considered “the go-to” when you want to talk about business and investment in the Nairobi estate.

The astute businessman is the recipient of a Kenya Revenue Authority (KRA) award from President Uhuru Kenyatta for his adherence to tax compliance. The businessman advises entrepreneurs to always ensure their issues are sorted out with the taxman or they are doomed.

From humble beginnings in North Eastern Kenya, Yare has established himself as a successful entrepreneur and businessman, inspiring people in his community and generations behind him. Here is his story as told by WoK.

Yare was born in 1954 in Wajir County, North Eastern Kenya. He was born Ahmed Sheikh Abdullahi but was later nicknamed Yare.

“It is my mother who gave me the name Yare. Normally, I am known by two names – like Ahmed Yare. I adopted the name and today that is what everyone calls me,” he told Eastleigh Pioneer during a past interview.

Growing up in a pastoralist community, Yare lived together with his family in a small town called Buna, Wajir County where his father operated a small shop and groceries business. They did not have camels, goats, or cows. They only had a donkey which would mainly fetch water.

In the Somali community, having many animals represents wealth, and therefore, Yare’s family was poor.

“We were looked down upon by neighbours. People said we were poor,” he recounted.

When the shift war broke out, many residents of Buna fled to Somalia but Yare’s father stayed put. At one time, he was beaten to the brink of death by the assailants. He suffered seizures and also went into a comma.

The family managed to stay strong and pulled through.

From primary school, Yare qualified for competitive admission at Wajir High School, where he completed his “O” Levels with a Division One. He was set to join Kagumo High School for his “A” Levels, however, his family could not take him to the school.

“The problem was the fare from Wajir to Nyeri and back. After the Shifta incident, we could not afford it,” he recalled.

Yare enrolled at Kenya Science Teachers College and did well. He then proceeded to study at the University of Nairobi.

“They also gave a small stipend of Ksh20 per month. So in three months, I could make Ksh60 and use it for transport home,” he says.

He also holds a degree in Education from Exeter, United Kingdom.

After completing his education, things went really well for Yare, as it did not take long before he bagged a job as a teacher.

“Immediately after I finished, I did teaching practise at Shimo La Tewa and started working at Garissa Girls Secondary School in May 1976. By early 1977 the British Council called me for an interview. I passed, and they gave me a scholarship to Exeter University,” he recalled.

He was the Senior Deputy Secretary at KNEC up to 2004 when he opted for early retirement.

By the time he was retiring, Yare had a factory at the Export Processing Zone (EPZ) called Yarena EPZ which produced basins, buckets, plastic plates, and mugs. The company exported its products to Ethiopia, DR Congo, and Uganda.

“After Saba Saba (riots named after the July 7, 1990 riots), the matatu culture changed. Before that, it was very peaceful. So we sold the transport business off to some Ethiopians. I couldn’t manage it with that craziness,” he told Eastleigh Pioneer.

Yare dipped his feet into the real estate industry by purchasing a Maisonette at Halai Estate in South C for about Ksh900,000 and another property in Mombasa. After his retirement, he was fully focused on business.

He sold the real estate business and bought a property in Eastleigh from the Stage Coach bus company. It was a bold move.

“When I took the property, I was down financially. I put all my eggs here. I did not want to spread myself so thin as to risk it all. I restricted myself to these buildings. Fortunately, Eastleigh Mall came. They leased that portion of land for 16 years and put up the mall. They were paying rent, so that helped sustain my family and me,” he narrated.

Yare is the owner of Yare Towers and Yare Business Park, both in Eastleigh. He advises budding businessmen that rapid expansion can be costly at times. To him, everything is methodical and calculated.

“Every business person must be careful with rapid expansion. If you grow too fast, you will be in trouble because to expand, you borrow money, and that money has to be paid back. If you expand too abruptly, you won’t be able to pay the loan,” he says.

Yare manages his businesses alongside his children, and before they think about expanding their empire, they do a lot of research.

“When you see how big the spaces are inside Yare Towers, you might take it for granted, but we took our time to build the place. We had to look at what people need. We talk to the traders and investors, show them our plans so that we understand the feeling of the people,” he says.

“We started with this (Yare Plaza), and we learned from the hitches that we encountered. We then addressed those hitches as we expanded. For instance, not every floor is in high demand in this one, but in the towers, every floor is in high demand because of how we did it. Our vision is to grow incrementally the way Sarit Center did. Sarit did not put up everything overnight. It grew bit by bit.”

Yare Towers has retail stalls, a restaurant, a dental clinic, a barber shop and a Salon spa for women. It also has 39 modern serviced apartments with a rooftop pool. The building has spacious hallways, lifts and escalators for ease of access.

Just like several other businesses across the world, Yare too felt the bite of the Covid-19 pandemic and took measures to cushion his tenants. Rent at the building goes for between Ksh25,000 to Ksh110,000 per month depending on the size of the space.

“With Covid-19 there was a significant drop in shoppers coming to Eastleigh and as a result, our tenants were struggling to meet their rent payments. We listened to our tenants early and prepared a discount package that ranged from 10% to 50% through 2020,” Yare said.

The pandemic also delayed the building’s completion by almost a year. It was set to be completed by September 2020 but due to the pandemic, the building was officially completed in June 2021.

“This was a challenging period for us, and we got through it by working closely with all our stakeholders and the grace of Allah,” he stated.

Yare has been awarded the KRA award by President Kenyatta.

In June 2021, he was appointed Chairman of Eastleigh Business Community.

“Eastleigh is a place of opportunity. A place of prosperity, a place of fortune and the sky is the limit. Come to Eastleigh. Security is good and the place brims with opportunities. Here, you will prosper,” he advised investors.

The Top 10 Most Influential Students in Kenya

Timothy Makofu: From Taxi Driver to Elected Politician in The UK