The August 2022 general elections have given Kenyan a new set of leaders. One such youthful politician is Allan Chesang who clinched the Trans Nzoia senatorial seat under the United Democratic Alliance (UDA) ticket.

Here is the story Chesang-a man who made his first million while he was in high school and has continued to soar high as an entrepreneur.

Allan Chesang was born in Matano village in Trans Nzoia County. He attended Kitale Academy before joining St. Anthony High School in Kitale for three years and later completing his O-levels at Musingu High School located in Kakamega County. He later joined Moi University main Campus in Eldoret where he pursued a Bachelor’s of Commerce degree specializing in purchasing and supplies. After completing his degree he enrolled for a Masters in Political Science at the prestigious University of Nairobi where he is currently in his final year.

Allan Chesang was destined for greatness at an early age. He actively played table tennis when he was a Form one at St. Anthony high school in Kitale. The multi-millionaire got an opportunity to join the national table tennis team in 2003 where he represented Kenya in the junior table tennis championships. His first major breakthrough is when he represented the country in Congo Brazzaville and emerged the overall winner bagging a cash prize of 1 million Kenyan shillings.

He was recognized globally and was poached by a table tennis club in France where he represented the club which was paying him a very good amount of money. He would represent the club in international games of which he would be paid at least Ksh 2 million every weekend while he was still a teenager. He used the money he was making to invest in his father’s insurance company known as Crackerbell Insurance Link which was in the business of buying and selling of shares.

Also Read: The Richest Kenyans Under 40

After completing his university, his contract in the French-based club ended and that’s when he decided to try his luck in the business world. He sold his shares in his father’s company and got some little money which he used to set up a Community Based Organization (CBO) named ‘Vijana Umoja Pamoja.’ The CBO mainly focused on educating the youths of Mt. Elgon region against being used by politicians to cause violence during the 2010  constitutional referendum.

He managed to get sponsorship from USAID amounting to Sh 9 million. After the referendum was over, he joined the entertainment industry where he would organize big events and bring popular artists to Eldoret. He did the business for a while before he quit and traveled to Nairobi where he began venturing in other fields.

Also Read: Amount Of Money Motivational Speakers Get Paid Per Gig In Kenya

During an interview with Comedian Felix Odiwuor in the Bonga na Jalas segment that aired on Jalango TV YouTube channel, Alan Chesang revealed that he operates a chain of entertainment joints under the brand name ‘Club Blend’ which is in different parts of Nairobi, Thika and Meru. Together with his partners, he owns The Craft Lounge in Westlands and The Garage Club in Thika. He also runs a clearing and forwarding company called Uplift Express and is a major distributor of Bamburi cement in the Western and Rift Valley regions.

He is also in the business of purifying water under the brand name – Aquarage purified water as well as in the Liquefied Petroleum Gas (LPG) industry. He is the Group Managing Director and Chief Executive Officer (CEO) of Transcentury Global limited – an internationally recognized company that has interests in private and public equity, real estate, credit and PPP projects. He is also behind the Allan Chesang Foundation – a non-profit charity organization that seeks to help the poor and give back to the community.

Allan Chesang first tried his hand in politics during the 2017 general elections when he unsuccessfully vied for the Kwanza Constituency parliamentary seat. He bounced back in 2022 and this time round clinched the Trans-Nzoia senatorial seat. His tweet read: 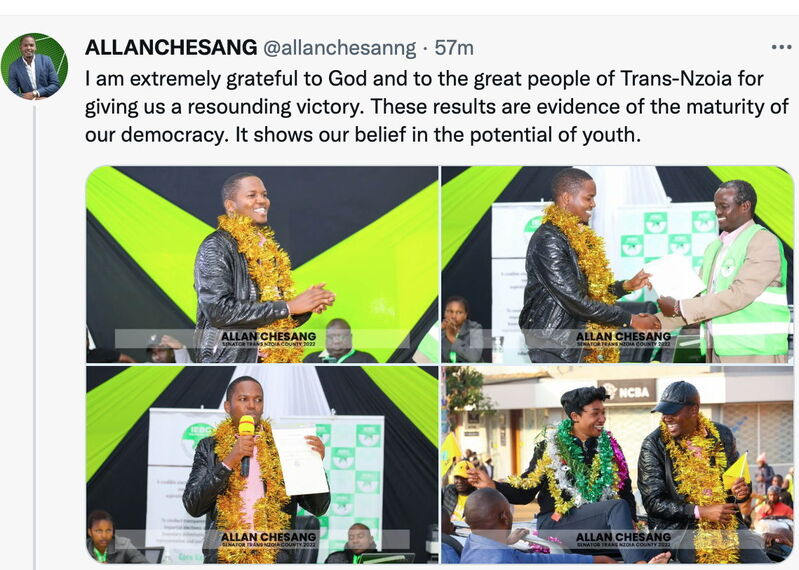