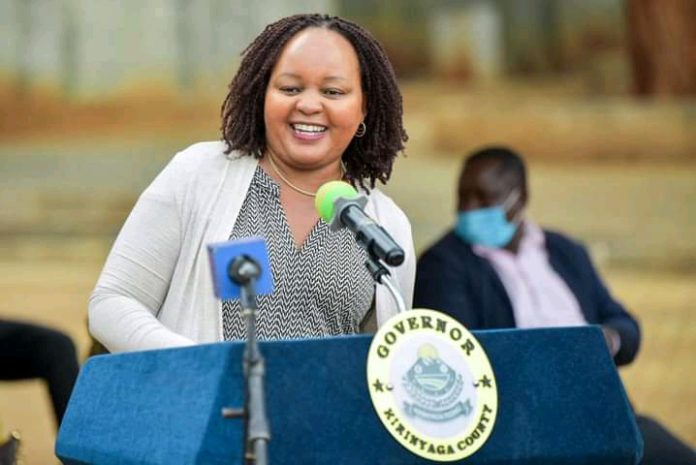 Anne Mumbi Waiguru is a woman who has described herself as a strict leader who pays attention to the tinniest of details in everything and everyone whom she interacts with.

But as a lover of RnB music, Waiguru seems to be continuously reeling in strong political waves that have characterised her career since her nomination to the devolution docket 8 years ago. This article takes a comprehensive cover on ‘minjiminji’s life, scandals, ‘catwalking’ and the latest unfolding.

She attended Nairobi River Primary School located in Buruburu. Waiguru then joined Precious Blood Girls, Riruta and was among the top students nationally.

The Kirinyaga governor pursued her A-level at Moi Forces Academy. She holds a bachelors degree in agriculture and home economics from Egerton University and a masters in economics from University of Nairobi. Waiguru is an expert in public finance and financial management system.

Waiguru was born in Nairobi at Pumwani Hospital. She is a last born in a family of 4 (2 sisters and 1 brother).

Waiguru’s father worked in the police service while her mother was a business woman. When growing up, the 50 year old got exposure to both the city and village life and assisted the family in farming activities during holidays.

In the mid 90’s she got married to lawyer Tony Waiguru, a son of a former MP and the couple were blessed with 3 sons: Don Waiguru, Dan Waiguru and Ron Waiguru. However, the first marriage hit crossroads around 2005 with allegations that Anne was that ‘career woman’ who was more ambitious than her husband.

In July, 2019 Waiguru entered into a second marrige when she exchanged vows with her long term friend and city lawyer Kamotho Waiganjo in a colorful traditional wedding. The ceremony  was attended by powerful politicians including President Uhuru Kenyatta, ODM leader Raila Odinga and former Vice President Kalonzo Musyoka.

The mother of 3 began her career as an intern at Transparency International. Her curriculum vitae got  decorated further when she began providing technical assistance to the public service reform secretariat. Additionally, her financial nous earned her a job in the National Treasury as head of governance and the economic stimulus programme.

In 2011, her adorable career in public service propelled her on the top 40 under 40 list.

Arguably, the name Waiguru became more prominent after she was nominated as the cabinet secretary for devolution and planning in 2013.

However, what began as a successful career in which she spearheaded the establishment of huduma centres and revitalization of the National Youth Service (NYS) would soon hit a grinding halt.

Waiguru’s name and photos began dominating the mastheads of leading newspapers in the country due to the ksh 791 million NYS scam that was reportedly fogged with an additional ksh 695 million.

It is alleged the NYS lost the said monies through dubious deals in supply of road construction and building materials in a tender that involved 6 companies.

Even though Waiguru initially denied these allegations, she later claimed that she played a whistleblower role in unearthing the scam.

In November 2015, Waiguru resigned from the devolution docket on accounts that she had suffered personal attacks on her family and that her doctor had advised her to ‘take lighter duties’. However, she maintained that she was a leader of integrity and hadn’t taken part in siphoning of public funds.

“I have always maintained a political and highly professional standards in service for the over 10 years I have been in public service. In the time I have served in the public and private sector, I have never had any questions raised about my professional or personal ethics, integrity or ability to deliver on any responsibility no matter how complex they have been,” she said.

Waiguru made a comeback to public service when she contested and won the 2017 gubernatorial seat in Kirinyaga county.

However, 3 years later, 23 out of 33 members of county assembly voted in favour of her  impeachment on accounts of abuse of office and gross misconduct.

After months of flipflopping about her political future, Waiguru made a strong indication that she was going to ditch Jubilee party for United Democratic Alliance (UDA) in September, 2021.

A video of Waiguru addressing Kirinyaga residents and asking them on the party they would like her to seek reelection bid quickly penetrated both the interwebs and local media.

However, the dust was yet to settle when the Ethics and Anti-corruption Commission (EACC) revealed that they had carried out investigations on alleged embezzlement of funds in the Kirinyaga County coffers.

According to EACC which has been on crosshairs with Waiguru, she is accused of abuse of office, conspiracy to commit economic crime, false accounting, deception and forgery.

Alongside other senior county officials, the governor is accused of an inflated ksh 52.8 million irregular payment to a land surveying company towards titling of 17000 acres Ngariama Scheme. On her part, the governor alleges the matter is a political witch hunt and that no single cent had been paid to the said company.

According to the People’s Daily publication, Waiguru is also accused of a ksh 10 million claim on travel imprest for non-existent trips to USA, UK, France, Morocco and other destinations.

EACC is expected to forward the files to the Directorate of Public Prosecution (DPP) with Waiguru likely to be ordered to vacate her office just as it has been with other governors accused of graft.

Finally, with allegations that EACC had  raided and arrested Waiguru on her Kitisuru home on Friday, 29th October, 2021, this site can authoritatively report that the claim is false.

Dennis Mbae Profile: He Had Given His Life To Christ But His Criminal Past...

The London Based Owners Of Junction Mall And Garden City Mall