Three words best describe Bevalyne ‘Bev’ Kwamboka, at least from my perspective. Bubbly, driven, genuine. We began the interview with a few laughs that followed a couple of jokes she had dropped. We felt her presence the moment she walked in. There is something about how she expressed herself, how passionately she spoke about her journey, and how happy she seemed with her current position in life. 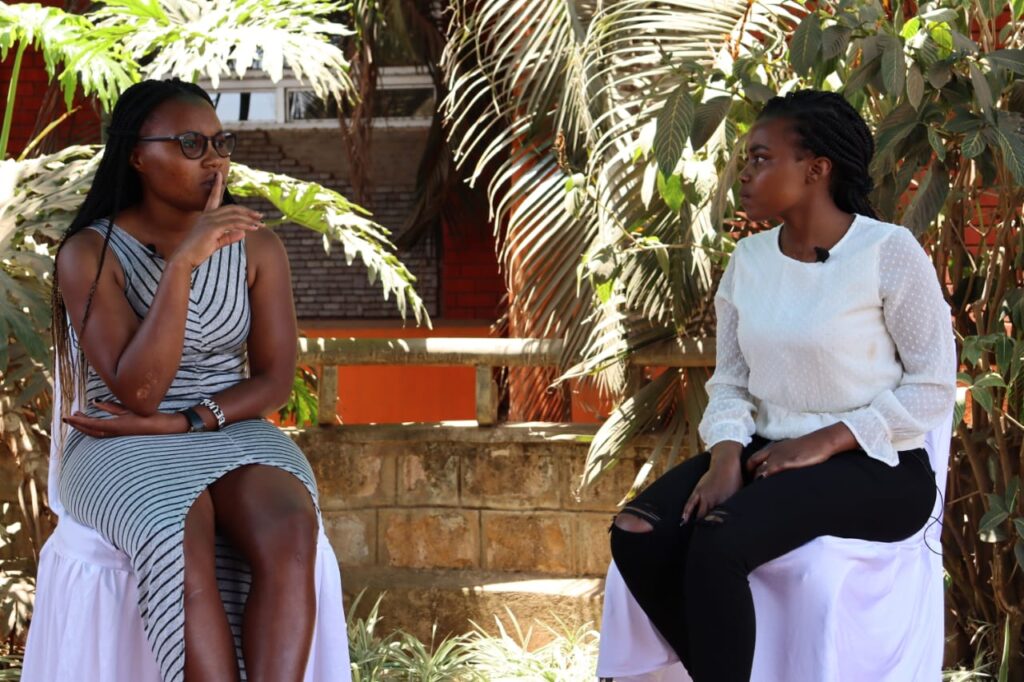 If you are a regular Twitter user in Kenya, you most probably follow her or have heard about her. She has always been an active user, tweeting often since her early days at Kenyatta University where she studied Education to become a professional teacher. But, what made her the influential person she is today was her hustle. Selling chipo under the Kware footbridge in Embakasi East area. Well, not so much the selling of chipo, but what she wore while selling the chipo.

Her mode of dressing that day, she tells us, was normal. That is what she would normally wear to school. However, the green, body-hugging dress she wore that day was the source of all the trending and trolling that followed her afterwards. Some internet trolls had very unnerving opinions of her choice of dressing, making up all sorts of stories about her. It is surprising that people still have opinions of other people’s sense of style; story for another day.

But, as fate would have it, that was the beginning of a very different life for Bev. The trending opened up doors she says she would not have had otherwise.

She spoke to WoK on a one-on-one interview to tell her story and encourage other comrades struggling to make ends meet. Here is the beautiful story of Bevalyne Kwamboka.

Bev, thank you for meeting with us today. For people who do not know you, who is Bevalyne Kwamboka?

Thank you very much Grace. Bevalyne Kwamboka is an entrepreneur, brand influencer, digital content creator and a teacher by profession.

Most of us know you from Twitter after you trended for your chipo mwitu business. Tell us about that incident and how it has been for you since then.

Well, it has been such a roller-coaster ride since I trended a while back on Twitter. When COVID hit and schools were closed, I was jobless with no source of income. I was staying with my sister then. At the time, we used to sell bananas we would bring from Kisii, but with COVID-19 restrictions and lockdown, it was difficult and expensive for us to bring bananas to Nairobi. So we had to come up with a solution to end our misery fast!

It was then that we got the idea to sell chipo mwitu under the Kware footbridge that was still in construction at the time. We only had a thousand shillings cash and 200 fuliza. We bought potatoes, cooking oil and borrowed a pan from someone we knew to start the business. We did not know how it would go, but to our surprise, we sold our stock on the first day and made a profit of over one thousand shillings.

You can imagine how elated we were when we made that money on the first day. So that is when my sister and I decided to sell chipo fulltime. What had begun with uncertainty was now a booming business.

Unknown to may at the time, I was a chipo seller and a student at Kenyatta University also. To save time, I would get ready in the morning, do house chores, cook chipos, then head to class. I used to wear nice body-fitting dresses to school, something that I still do. I like to look good! (Laughs)

So, one day as I was cooking chipo, a friend of mine commented on my look and said I looked really nice. Then she took a photo of me frying the chipo and I put the post on Twitter, like I normally would.

To my surprise, the tweet went viral. I remember getting over two thousand new followers daily and countless of likes and retweets on that post. I was totally surprised at the direction that tweet took. Unfortunately, majority of the comments on that tweets were very nasty, with some people questioning my choice of dressing.

How did you deal with this instant fame and the trolling that came with it?

The trolling was not easy at all. Some comments were very nasty. But amid all that, I got people who actually liked my hustle and encouraged me to ignore the trolls. At school, everyone was happy for me. I became a celebrity of sorts at school.

I was unhappy with the trolling, but I developed a thick skin and did not let the bad comments get to me.

How can you say the trending affected your life?

I was able to get a few sponsorships from corporates and other companies. One time, I made a plea for someone to help me with an umbrella to shelter us from the rain under the bridge. When I did that, Odi Bets gave me merchandise like caps and a few umbrellas, for which I am eternally grateful. I have also been able to work with big companies like MultiChoice to promote their products and offerings online. This is an opportunity that has put me in a position to make very good money using my Twitter platform.

Do you plan on practicing your profession?

At the moment, no. The point of working is making money. I am currently making way more than I would if I was just teaching. So unless I can make this kind of income through teaching, I will concentrate on brand influencing and chipo business for now.

So you still sell chipo?

Yes! I have grown since I blew up on Twitter, so I employed someone to help out my sister while I do other jobs on the side.

What keeps you going Bev?

Fear of poverty! I fear going broke again. I fear not having money. I have a brother in school whom I pay school fees for and I am also building a house for my parents. Those tasks require a lot of money. So my motivation is knowing I have responsibilities and I want to live a very good life.

What is your advice for other young people who are struggling to make ends meet?

My advice to them would be to explore their natural talents and leverage on social media. There are so many things to do online, as I believe there is an audience for everyone. Keep your head up, open a YouTube Channel and capitalize on your interests. This is what got me to where I am.

Bosire Bogonko: How Shadow Of Death Followed Blogger’s Family After His Disappearance

Harrison Oloo: Meet The Man Who Makes Millions From Garbage

Harban Singh Amrit: The Billionaire Whose Buildings Are Rented By Safaricom PLC