Veteran media personality Catherine Kasavuli was born in 1962 and raised in Nairobi West. She attended Ngara Girls High School. She began her career as a radio continuity announcer in 1980 at the Voice of Kenya (VOK) which was later rebranded to the Kenya Broadcasting Corporation (KBC).

Barely 18 years old, her uncle who heard her read the bible and pray, urged her to pursue a career in the media.

“He said I had a remarkable voice and that my expression, articulation and diction was also very good and urged me to try my luck at the Voice of Kenya where there was a vacancy. That’s how I ended up going for an interview,” she narrated, during an interview with the Standard.

“We were 10 of us at the interview, but we were scaled down to three. Dorothy Nyong’o, Kisumu Senator Professor Anyang Nyongo’s wife, was in the interviewing panel,” Kasavuli recounted.

Working as a radio presenter, her voice and talent commanded a massive audience and in 1985, she would later transition to television. At the time, she had no prior experience, and two years into her job, she attended the Kenya Institute of Mass Communication. 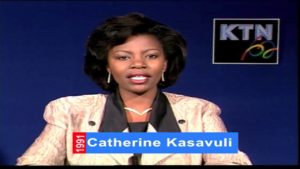 Kasavuli conceded that her adjustment into the new environment took time.

“I would sit at the office canteen or at the reception, afraid of sitting on someone’s chair and crossing their path,” she intimated.

At the time, she earned Ksh1,500 per month, but made extra cash from voicing commercials.

“I would earn around Sh3,500 from commercials. One time in 1985, I earned Sh25,000 from a commercial and those days that was like Sh2 million! I not only joined a sacco called Sauti Cooperative but also opened an Eaglet account for my son,” she narrated.

In 1990, Kasavuli was part of the founding team of anchors at the Kenya Television Network (KTN), the first privately-owned media house in the country at the time. She went on to become the first woman news anchor in Kenya, and the first at the station to go live.

This marked a transition from previously pre-recorded news.

While working at KTN, she recounts a time they went overboard with their reporting, earning them a summon to State House.

“That was a close shave. Executive bosses were reprimanded in our presence and we dared not speak or breathe. It was tense! But relief came when we were told that despite that misdemeanour, we were professionals with a refreshing approach to news gathering and delivery and were pardoned and directed to be impartial and balanced,” she was quoted by the Standard as saying.

After 17 years at KTN, Kasavuli was part of the 2007 mass exodus to Royal Media Service (RMS) owned Citizen TV. Other top anchors who made the switch at the time included Louie Otieno and Swaleh Mdoe.

She started off as an anchor and was later appointed corporate affairs manager at RMS.

Kasavuli retired in 2015 and went into private practice. She is the founder and owner of Kasavuli Media Group which owns a several subsidiaries which include a training institution for broadcasters.

The veteran news anchor is a mother of one. A son named Martin, who was born in 1981. Due to the demanding nature of her work, she was forced to leave him home during the early years, and regrets missing his childhood.

In 2008, Kasavuli was awarded the Order of the Grand Warrior during Jamhuri Day Celebrations.

The death of the veteran news anchor was announced on 30 December by KBC acting managing director Samuel Maina.

The Loft Lounge: A Look At The Controversial Club That Has Got Kenyans Talking