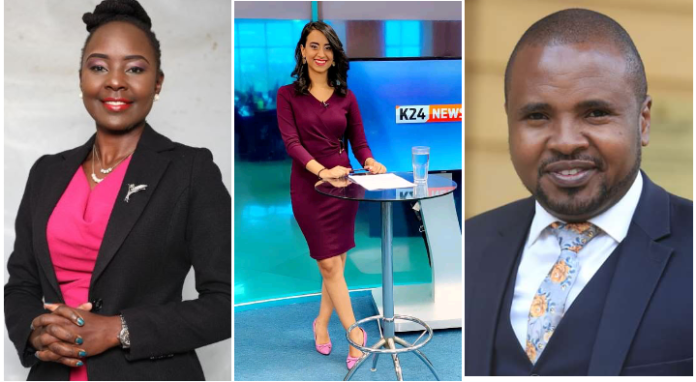 Both the media and medical professions are demanding fields that require sheer hard-work and the right mindset for one to succeed. Undoubtedly, they also hold  crucial positions not only in Kenya but across the globe.

Due to personal reasons, some renowned media professionals have been able to dump the stethoscope for the camera lens. This article will feature these journalists who found a safe haven in the fourth estate.

Dr. Mercy Korir works for the Standard Media as a medical and science reporter and editor. She has been doing an excellent job in educating the masses about health issues and also demystifying certain myths. Through KTN and KTN News, Korir has been the face behind Doctors Diary that features medics who have excelled and Health Digest segments.

Korir was brought up in abject poverty by a single mother in Kapsoit Village, Kericho County. She was a brainy student who went on to study at Bahati Girls before enrolling for a medicine and surgery programme at UoN.

After completion of her studies, Korir worked at Machakos Level V hospital as an intern. However, the real situation of inequality in healthcare unfolded before her eyes and this became an issue that she was determined to have it resolved.

While some of her colleagues went on to take postgraduate studies in medical field, she matriculated at UoN for a Masters in General Communication. Korir then joined Standard Media in 2016.

Enock Sikolia is a reporter whose bravery in storytelling is on top level. Sikolia studied at St Luke’s Boys High School in Kimilili then proceeded to study Medical Laboratory Science at Kenyatta University.

But despite graduating and even working at Moi Teaching and Referral Hospital, Sikolia wasn’t in love with his profession. He was passionate about changing shift to the media industry.

“I switched career from being a medical laboratory scientist to a journalist and given another chance I would do the same.  Telling the African story is my passion,” he said in a post dated May 2020.

Sikolia’s career in media has been impressive and this has seen him win a number of awards. He worked for NTV before joining Citizen in 2018. He currently works for CGTN Africa.

Lofty Matambo holds a Diploma in Medical Laboratory Technology from Kabete National Polytechnic. While working at a clinic, he once participated in a radio competition that required listeners to try out a two-minute reporting. He emerged the victor and even earned the chance to meet Anthony Ndiema, then working at Hope FM. But while he thought he had earned a job, it only turned out to be a dinner event. After Ndiema left Hope FM, he informed Matambo to try his luck but he (Matambo) wasn’t successful. Later on, the news anchor was employed by KTN where he worked for more than 7 years before he left for NTV in an emotional exit that saw him break the news on live TV.

Shiksha Arora studied Microbiology and Biotechnology at UoN. She once presented herself for an audition at Easy FM and emerged the best. Having cut her teeth in media, she seems to have said goodbye to her maiden degree as she went on to study a Masters in Broadcast Journalism at the University of Westminster in United Kingdom. Arora worked for K24 as an anchor before a massive retrenchment hit the media house in 2020. She was however hired by KBC in a rebranding strategy in 2021.

Savannah Cement Gets New Buyers, to Acquire 60 Per Cent Stake

The Side Hustles Of Popular Inspekta Mwala Actors

Siblings From Wealthy Families Fighting For Their Parents Multi-Billion Investments