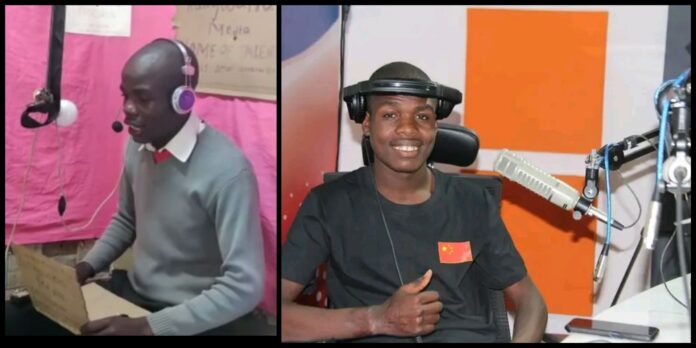 They say you do not have to see the entire staircase for you to take your first step. And this is the exact story of how Charles ‘Kangwana’ Onkoba, a first year student at Kenya Institute of Mass Communication (KIMC), launched his media brand.

Armed with the gusto to make a breakthrough in the highly competitive media industry, Kangwana carved a niche for himself using the online space. His unerring journalism skills propelled him to celebrity status in Kenya after he posted his videos on Tiktok.

But there’s a beautiful twist on it; Kangwana told Presenter Ali that some of the keen listeners loved it when he pronounced the Swahili word ‘mkurugenzi’ as ‘mkorogenzi’. Instead of criticising him, they said the word sounded better thanks to his commanding voice.

Kangwana hails from Mosora village which sits deep in the lush green Gusii Highlands. While studying at Mosora SDA, his family faced financial constraints which threatened to fizzle out his education dreams to whimpers.

Despite surviving on the thinnest slice that life offered, Kangwana held on to his favourite phrase: “Naamini ipo siku tu.” (I believe there will come a day).

While in form two, the creative student converted his bedroom into a simple media house. He covered the mud walls using old newspapers and used a pink bedsheet as his background.

With a smartphone, and a bulb powered by solar, he kickstarted his career by going live on social media.

From gloom to boom: Kangwana’s impeccable skills were impossible to be ignored. With sheer determination, he hosted various shows such as ‘Sabato Njema’, ‘Concert Friday’ and ‘Sunday Express’. Egesa FM, one of the radio stations under Royal Media Services reached out to him to air his story. He would also be featured on Nation, Citizen TV and Radio Maisha.

As he continued with his digital media brand, Kangwana got some gigs like football commentating which enabled him to pay his school fees and support the family.

“I’m working hard as a way of realising my dreams of being a journalist. I started this channel as a way of looking for school fees because I come from a humble background,” he said.

The rise of Kangwana Media

Kangwana is the face behind Kangwana media which boasts of 26k subscribers and 1.1 million views on YouTube. On Facebook, he has over 49k followers. Kangwana has a bias for inspirational stories and has mastered the Swahili language.

In a phone conversation with this writer, he divulged that he is currently in his maiden semester at Kenya Institute of Mass Communication.

He also hinted that his plan is to get employed by a reputable media company even as he continues steering Kangwana Media to a wider fan base.