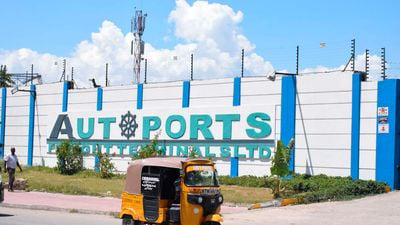 A new special audit report by the Auditor General has shown that a logistics company linked to former Mombasa Governor Hassan Joho was awarded a contract on concessionary terms to operate at the taxpayer-funded inland cargo terminal.

According to the report, Autoports Freight Terminal Limited was awarded the contract to operate the terminal in Nairobi in 2018.

However, it emerged that the firm won the contract on forgeries of board resolutions by the then-acting Kenya Railways Corporation (KRC) managing director.

The logistics company was seeking concessionary lease terms after being allowed to set up at the Nairobi Freight Terminal (NFT).

It also wanted to introduce waivers of stand premium and annual rent premium for 10 years, meaning that they would pay a discounted freight tariff of $450 per wagon of 60 tons for the period.

However, the KRC board voted to reject the waiver appeals, saying that they were only available to firms setting up their own greenfield facilities.

However despite the board voting down the waiver appeals, the the. acting KRC MD wrote to the Transport CS saying the board had approved the appeals.

“There was a letter from the acting MD (Ref: KRC/CS/MD/3/388) dated December 14, 2018, addressed to and received by the CS for Transport on December 17, 2018. The content of the letter misguided the CS that the board approved all the conditions of Autoport’s appeal and was requesting for the CS’s approval

“The special audit did not obtain any official written correspondence from the CS responding to this request,” the Auditor-General said in the report.

Autoports also secured a preferential deal to transport cargo from Mombasa to Nairobi over a 10-year period at up to 80 per cent discount.

Rita Field-Marsham: The Daughter Of Nicholas Biwott Who Declined Inheritance From Her Father

Lerruat Log Resort: How A Grandmother Holiday Home Was Turned Into A Multi-million Hotel

Top Journalists Whose Career Ended or Dimmed When They Joined K24