Dennis Okari has risen through the ranks to become one of Kenya’s top investigative journalist. He is a bilingual reporter-who is comfortable in both English and Swahili. The hallmark of his career is when he had a stint at the British Broadcasting Corporation (BBC).

Okari’s authoritative voice combined with his demeanour-and of course looks-have made him a celebrity in and out of the newsroom. Mr. Okari has traversed some of the most dangerous places in Kenya and beyond just to bring news to people’s homes.

“ I remember there was this time in Somalia we were on our way to interview Jubaland president and the Amison bomb squad found an IED in the route we had used before. So when they took it to a safe place to detonate I asked if I could come close enough to hear the shock wave of course they refused but allowed me a safe distance where I felt the shock wave……..”

Rarely, would anyone want to be in that situation but not Denis who takes courage to another level. He is also a motivational speaker, a passion he had from a young age.

The journalist is an alumnus of Kenya Institute of Mass Communication.

The media personality has had a long run as a journalist. His resume is impressive as summarized below:

From 2003 to 2004, he worked as a research and voice over artist at Kenya Broadcasting Network.

He then left to join TBN-Family Media in 2005 as a presenter and producer.

In 2007, he joined Baraka FM. He worked as the head of production and also a breakfast drive presenter.

In 2009, he joined the Standard Media Group and worked here till 2011 as a news anchor.

From 2011 to 2013, the news man worked as a senior investigative and crime reporter at Nation Media Group.

In October 2015, Dennis Okari and Betty Kyallo got married in an exclusive, much publicised, elegant, English themed wedding at the Marula Manor, Karen. This was followed by a stay at the Diani Beach hotel then a two weeks travel across the world. Unfortunately, 6 months later the couple separated due to irreconcilable differences. Betty went further to narrate how he even failed to show up for their first traditional wedding prompting the need for a second one that was attended by very few people.

“ I needed to find our what time their entourage would arrive. But he did not pick up my call. I tried calling again after an hour and once again it went unanswered.”

“ At 3pm, when we tried to call again, all their phones went off. By the time the sun was going down, it was obvious I had been stood up on my traditional wedding”

Despite the troubled traditional wedding, they got married and parted ways six months later.

The couple has moved on and one can only hope that they find happiness in their new life. They have a beautiful daughter named Ivanna.

The celebrated journalist found love again and got married February,2019 to Naomi Joy in an invite only ceremony. They got married two weeks after announcing their engagement. Naomi is said to be an accountant and a very private person who does not court media attention. The couple celebrated their one year anniversary this year and Dennis penned a sweet message to Naomi. Part of the message read:

“ I’ve waited this long to say happy first anniversary to you my love. I cherish, respect and honor you on this special day. You are the most amazing woman of God I’ve come to know. To many more years together. To many more celebrations. To God, thank you for giving me the joy of my life,” wrote Dennis Okari.

It is worth mentioning that he won the best journalist of the year award, Media council of Kenya, in 2014. 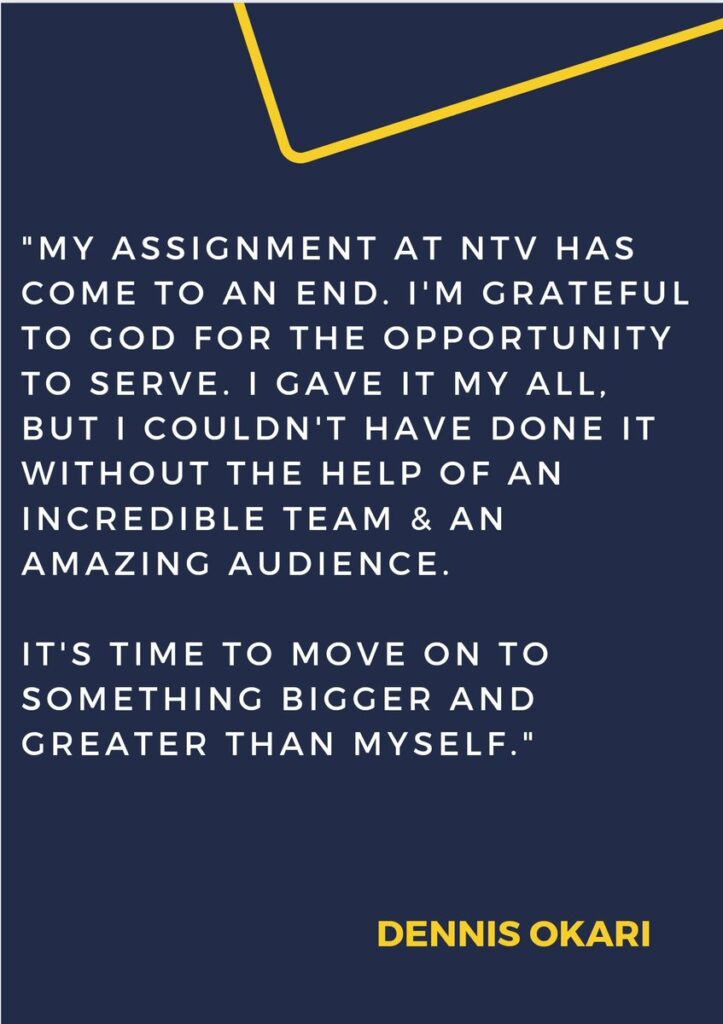