Dr. David Wachira is a fintech entrepreneur, public finance specialist, mentor, and philanthropist. He is currently the co-founder and managing director of fintech startup Wayapay and Janta Capital, a fund focused on African Investments towards SMEs. He is also a public-sector specialist at the World Bank and served as the co-Secretary for the World Bank Group’s Youth to Youth.

Wachira’s journey to the top has been through numerous adversities, and his story is an inspiration to all those aspiring to achieve their goals in life. Being a member of the Akorino community, he has faced all the stereotypes that come with being of the faith.

For a long time, the Akorino were considered ineffective and uninterested in various matters such as national politics. However, a number of people from the community have risen to defy the odds, discrimination, and stereotypes, to fly the flag of their faith high across the country and world. This is the case of Dr. Wachira, who rose from nowhere to serve at the World Bank. 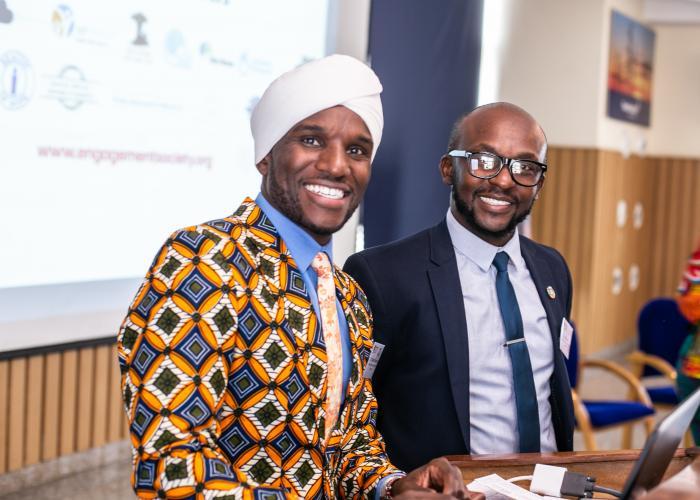 Dr. Wachira was born in Kerugoya, Kirinyaga County, and grew up in Nyahururu. He later moved to Texas, United States when he was in class seven.

He attained a PhD in Public Administration and Management with an emphasis in Public Finance and Public Management from The University of North Texas. He attended the institution between 2008 and 2013.

During an interview with a local daily, Wachira revealed that he risked being deported after finishing his Masters Degree due to an expired visa. At the time, he was hell-bent on joining law school but his application was rejected.

“I was an international student which means I needed to be in school the next semester, otherwise I was going to overstay my visa. I had just completed undergrad and I did not want to enroll in any course just to extend my visa. All I knew was that I wanted to stay in Texas because that was where my family was,” he recounted.

To save himself from Deportation, Dr Wachira decided to pursue a PhD program. So he researched on possible entries in Texas and enrolled for Public Administration and Management at the University of North Texas, a study field he knew nothing about.

Previously, Dr Wachira taught public policy in the political science department at Southern Methodist University (SMU); served as a teaching fellow in public finance, bureaucracy, and public administration at the University of North Texas and as an assistant professor of history and economics at Wiley College.

Between August 2011 and August 2013, he was an assistant professor in the Department of History and Political Science at Wiley College.

Dr Wachira joined the World Bank in 2013. Until August 2014, he was public sector specialist in Poverty Reduction and Economic Management, Europe and Central Asia. Between September 2014 and September 2015, he adviced on Public Resources Mobilization and Financial Management, Africa Region.

He co-founded Wayapay in April 2015. The app enables Africans living abroad to send money back home in a fast, convenient and efficient manner.

Dr Wachira has been a victim of mistaken identity on various occasions. Being of the Akorino faith, he wears a turban that has often had people stereotyping him. He notes that in the US people don’t know anything about the Akorino, so by wearing the turban, he is categorised alongside Sikhs and Arabs. He named airports in the US as areas where he is mostly a victim of stereotypes associated with the turban.

“I remember this one time in an airport, I was flying in and a gentleman from the security department told me ‘you have been selected for a random check’. I’m like ok and by this point, I tell myself it may just be a random check. He goes ahead and swabs my hands, checks for various residues and gives me an all-clear.

“But then, as soon as I moved to another line, another guy approaches me, pulls me to the side and tells me that I’ve been selected for a random bag check. I was like, ok there’s a lot of randomness happening here today, but please go ahead and do it,” he recounted.

The bag was taken through those machines and once again he was given the all-clear after being given a full pat-down.

“However, just before I move through, he says ‘excuse me sir, I’m sorry but you’ve been selected for another random check’, – at least they’re polite. By this stage, I clearly realise that there’s nothing random about these checks. I go through this process seven out of 10 times at different airports in the US,” he says.

During an interview with Jeff Koinange on JKLive, Dr Wachira revealed that he was mistaken for a driver during a visit to a local hotel with his wife, Cecilia Wachira.

“I went to (a local hotel) and so the staff told me, ‘just drop her over here and go park, and I was like ‘it is my car, she is my wife, I can park wherever I want’,” Wachira stated.

In another instance, Treasury officials once confused him for a waiter.

Dr Wachira met Cecilia in Washington D.C in March 2018. They dated for a while, and he proposed to her in November 2019, and she said yes.

On the question of how she took Wachira’s Akorino faith, Cecilia revealed that their difference is shat has made their bond stronger. She admitted to researching about it, and getting to know more about the community.

“It didn’t bother me, I was intrigued actually and it drew me closer to him. I really enjoyed how different and unique he was. Its good.

“When we are together people stare at us, some ask what it is, and now I have learnt about it. It is part of me now,” Cecilia told Jeff Koinange.

She is a professional photographer, with a focus on sports, and weddings among other events. She has covered a number of high profile events, interacting with powerful individuals, among them President Barack Obama and Pope Francis.

In 2014, he established the Wachira Endowment for Public Service to provide scholarships and grants to university graduate students and in 2017 he co-founded the Youth Engagement Society (YES), to empower the youth through connections with successful role models by providing resources and opportunities to network with leaders and young professionals from various settings and careers.

“Effectively addressing the special needs of these youth is a critical challenge for the future. Unfortunately, hundreds of millions of youth—especially young women—lack education, skills and job training, employment opportunities, and health services effectively limiting their futures at a very early age. As a result, youth may react by unleashing risky or harmful behavior against themselves or society.

“Although youth may often be perceived as contributing to society’s problems, they are, in fact, important assets for the economic, political, and social life of their communities,” Wachira told Fuzu during a past interview.

The Youth Engagement Society (YES) was the result of addressing the need to empower our generation and their aspirations. The foundation strives to engage, inspire and empower youth to live a life of fulfilled aspirations. YES recognizes that youth are in dire need of individuals who recognize the best in them.

“We have been able to fund 11 startups that work to find solutions to local and global challenges. The fund has enabled these startups to reach key technical or commercial milestones by allowing them to gain considerable exposure and opportunities to meet potential partners, investors, key audiences, and stakeholders.

“Additionally, we have been able to reach thousands of people by facilitating training that offers skills-building and mentorship to the youth. By using transformative leadership, we are able to take youth through holistic ways of being great people in this world,” he said.

Due to his passion for serving society and uplifting the youth, Dr Wachira is on the record stating that he would run for elective office in Kenya if the opportunity arose.

“I have a specific set of talents that either got me at the bank or got me into Academia and they can easily be turned and put into the life of public service. It has started, of course, in the work that we are doing in youth and development… I believe I have something to offer and I want to offer it,” he told a local daily.

Lucy Wangare Muchiri: From Vending Food Under A Tree To Building A Sh80m Hotel