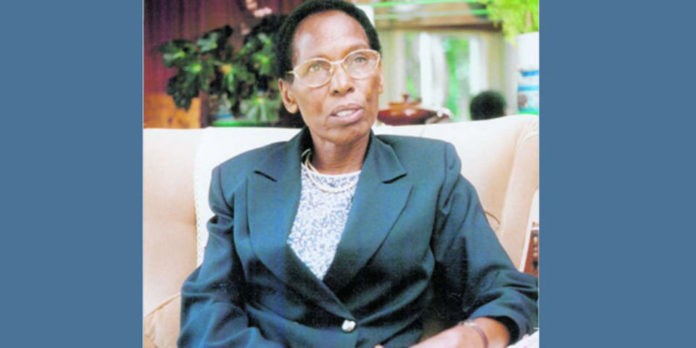 According to a report by the Nation, during Edith’s stint at Makerere University in the 1950s, she was described by many as the girl every man would have wanted take home to their mother and say “this is the woman I want to marry”, until of course, they lost the race to Matiba.

“She was top of the class. She was beautiful, and she came from a good family,” a Makerere alumnus told the publication during a 2018 interview.

Edith and Matiba met while still in primary school. At that tender age, Matiba had told himself that she would be his future wife.

She is the daughter to Reverend Musa Gitau, a pioneer Presbyterian Church of East Africa clergyman at Thogoto Mission, Kikuyu. Her siblings Joan Gitau, Bernard Wachira, and Alexander Gitau are among the few known to the public.

Rev. Gitau was among the Africans who played key roles in the establishment of Alliance Boys, Alliance Girls, and the Kikuyu Mission Hospital. Musa Gitau schools in Thogoto were named in his honour.

Edith attended Alliance Girls High School and later proceeded to the University of London where she graduated with a Bachelor of Arts in Education degree.

She later obtained a Master of Arts from Columbia University in the US and post-graduate diploma in teaching from the University of London.

By 1964, Edith worked as a community development officer earning Ksh1,000 per month as her husband, Matiba earned Ksh3,200 per month as a PS in the Ministry of Education.

According to the Nation, she was the pioneer headteacher at Moi Girls High School, Nairobi. She later lectured at the University of Nairobi.

Matiba knew Edith from primary school when he identified her as his potential future wife. He rekindled his interest in her when she joined Alliance Girls in 1951.

In a bid to win over Edith’s heart, the veteran politician befriended her elder brother, Bernard Wachira, for an opportunity to sneak out of Alliance and visit her at their home on Saturdays.

They proceeded to join Makerere University in Uganda, and while at the institution, Matiba kept off most indulgences so as not to embarrass his fiance’. He did not partake in alcohol, he did not go out partying, all in a bid to stay the course and wife his dream girl.

In his memoirs, Aiming High: The Story of My Life, Matiba recalls that the only thing he indulged in was smoking.

He confessed that the reason why he worked hard in college was because she was always at the top of their class.

“I never contemplated how I could ever face her parents to ask for her hand in marriage had I failed at Makerere, where Edith and her sister were always top in the class,” Matiba said.

After leaving Makerere, the couple got married on April 8, 1961. Together, they have five children – Susan, Raymond, Ivy, Julie and Richard.

In his biography, Matiba describes Edith as the pillar their family would turn to. She was also very protective of her children and would not let anything stop her from ensuring the safety of her family.

During Matiba’s stint as PS and during his detention, she was key in holding their family together all while ensuring uttermost support for her husband. He admitted to being so much indebted to his wife for taking care of the family in his long absence as duty called.

In his autobiography Aim Higher, Matiba adits that Edith was strongly opposed to his decision to venture into politics in 1979.

She had argued that Kenyan politics came with too much “noise” that would disrupt the peace and quiet in their lives. She wanted to pursue a professional career and engage in community development and charity work. She told Matiba that there was too much witch-hunting in Kenyan politics that as straightforward as he was, would not fit in.

Edith was the happiest in the world when her husband announced his resignation from the position of Cabinet Minister in 1988.

“She felt relieved that finally, I was quitting the hustle and headaches of politics”, Matiba said later.

Matiba returned to politics after 15 months away, and this time around, Edith sensed mischief. She was against her husband returning to the murky political waters in the country at the time.