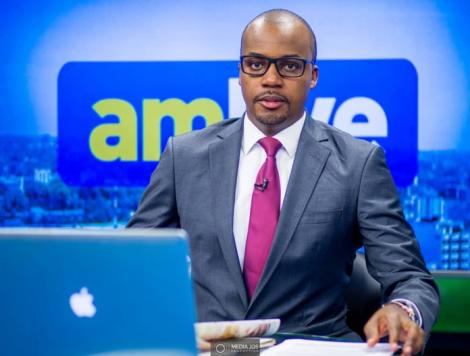 Edmond Nyabola is a former primetime news anchor working at NTV Kenya. However, his has not been a smooth journey, having experienced a relatively rough journey to the top.

In a quick-fire interview at NTV some years back, the renowned journalist narrated his journey from a village in Siaya County to being a news anchor on NTV.

The firstborn of three was raised by a single parent in Siaya, after losing his father at 8 years old. In the interview, Nyabola revealed that he first visited Nairobi when he was selected to join the University of Nairobi in 2009.

“Being raised by a single parent in a village set up where you don’t always get what you want, shaped me up in a very huge way. We didn’t have much, it was basically a struggle but am grateful that I got here,” Nyabola narrated.

The NTV anchor added that he did not have it easy as a student in the University of Nairobi. At some point, he resorted to odd jobs to raise money while still a student at the university.

“Some think I am a rich kid, no. At some point, I had to work as a shoe shiner to pay my school fees at the University of Nairobi. For three months I woke up at 5.00 a.m. and go to archives and shine shoes,” Nyabola recounted.

He was drafted to the institution to pursue a Bachelor of Arts degree, and later specialized in communication when he got to third year. “Not to say I set out to be a journalist, I did not, but life changes you like that,” he stated.

His journey in media began when the Nation Media Group, through a programme called Media Lab, approached the university for interns. While NMG wanted just eight interns, he was take in as an extra.

For someone who did not study journalism, Edmond has proven that he has what it takes to be among the best. He stated that his knowledge of self and ethics were key to his success in the industry.

In the interview, the NTV anchor recounted a time a rather unexpected thing happened while he presented news.

“There is a day I had this issue, I had grown a little fat. I went on air and buttoned my coat. All of a sudden, my button popped and I could feel it, just as I was in the middle of my intro,” Nyabola narrated.

“You could hear it roll away, and then when they came back to me after the story, my jacket was open. Someone tweeted saying Edmond’s jacket can now breathe,” he recalled.

“As a human being, you have to believe in something and have to stand for it regardless. If you have those values in you, it will just work out,” he stated.

He has also been recognized for his efforts in the profession, receiving awards including the Devolution Reporting Award at the 2019 Annual Journalism Excellence Awards (AJEA) Awards.