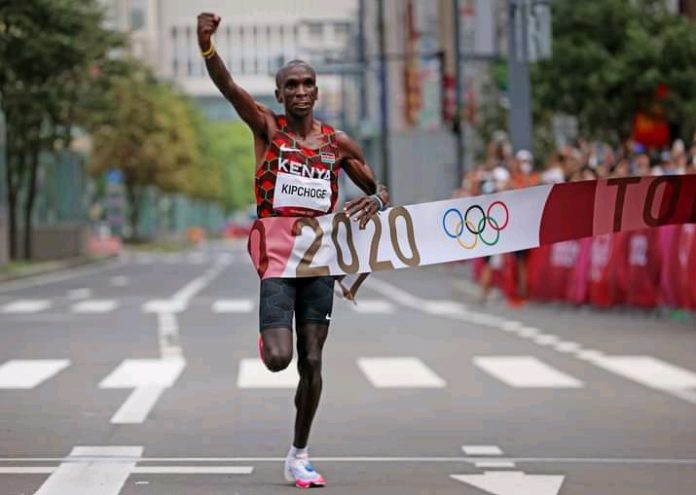 Eliud Kipchoge is regarded as the greatest marathoner of our time and is the world’s marathon record holder and  Kenya’s most decorated athlete who has been on the track for over 18 years.

Kipchoge was born on 5th November, 1984 meaning he is turning 37 in a couple of months.

He studied in two primary schools located in Kapsisiywa village in Nandi county before joining Kaptel secondary school. Kipchoge did not progress to tertiary level education because of lack of school fees.

“I was born and raised by a single parent (mother) and we had limited resources to pay for my school fees,” he disclosed during a talk with Oxford Union.

The marathoner is a last born in a family of 4. He didn’t get to see his father because he passed away when he was still young. In order to fend for the family, Kipchoge’s mother was initially a kindergarten teacher and switched to selling local brew after retirement.

The athlete’s wife is a humble lady who goes by the name Grace Sugut. They have been in matrimony for 18 years and are blessed with 3 children; Lynne, Griffin and Gordon. Interestingly, Kipchoge studied in the same school as his wife and describes Grace as the home’s manager since the couple only meet once in a long while as the marathoner spends most of his time training in the camp and only returns during weekends.

The father of three has investments in real estate and agriculture. As a public figure, he has been in multi-million deals  such as being the official brand ambassador for motor vehicle manufacturer Isuzu. Kipchoge bagged Ksh 5.8 million after winning the Berlin marathon and Ksh 80 million for a world record of 2 hours 1 minute and 39 seconds. Additionally, it was a pay bonanza when he earned ksh 5.8 million in the London marathon. His estimated net worth is over USD$2.5 million.

Kipchoge used to run to school. In a week, he would run for a total of over 20 kilometres. After high school, the marathoner used to deliver milk in Kapsabet town and used the money he acquired to purchase running shoes.

Kipchoge saw an idol in Patrick Sang, a man who was by then a retired athlete and lived only 3 kilometres from Kipchoge’s home. As a man with sharp social skills, Kipchoge concealed his real intention when he approached Sang.

“There was this kid who used to come and say: can you write me a programme? I would just make notes for him, and he would come back after two weeks and report he was done,” revealed Sang who is Kipchoge’s current coach.

As a budding athlete with a burning passion, Kipchoge began by competing in local events held in Kapsabet where his pace was unmatched.

But Kipchoge didn’t start as a marathoner, instead he specialised in the 5000 metres race where he won in 2003 IAAF junior championships. In the same race, he won silver medals in 2007 world championships, 2008 summer Olympics and 2010 Commonwealth games.

Kipchoge switched to the 26 miles race in 2013 and won in Hamburg, Germany. In all the marathon’s he has participated, he always clinched the gold medal with exception of 2013 in Berlin and 2020 in London.

In 2017, Kipchoge clocked 2 hours and 25 seconds in an experimental marathon race in Manza, Italy. The time was however not recognized because the race was controlled by use of pacesetters.

In a bid to run in under 2 hours, yet again Kipchoge proved that no man is limited when he completed the 42 km race in 1 hour 59 minutes and 40 seconds in Vienna Austria. The time was also not recognized because it was ‘engineered’. However, the Vienna challenge stamped Kipchoge’s name into the Guinness World Record.

Recently in the closing hours of the Tokyo Olympics, Kipchoge delivered one last gold for Team Kenya at a time of 2 hours eight minutes and 38 seconds making history as only the third person to win a back to back Olympics marathon.

“I think I have fulfilled the legacy by winning the marathon for the second time, back-to-back. I hope now to help inspire the next generation,” Kipchoge said.

Hassan Joho Named Most Business-Friendly Governor in Africa, To Be Feted in London

Willy Paul Net Worth, What He Owns And How Much He Charges Per Show