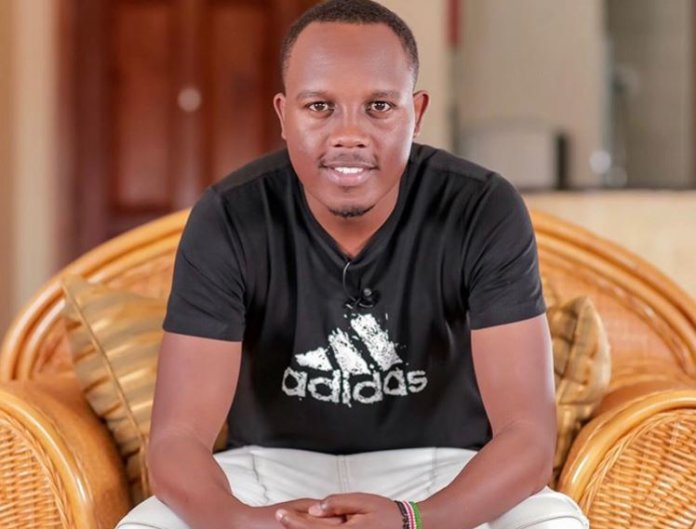 Abel Mutua is widely regarded as one of the funniest and finest actors in Kenya. He has starred in local movies and series, been in front of the camera and behind the scenes for most of his life. He first caught our eye playing Freddie in the popular high school comedy series Tahidi High.

Since then, it is hard to even think of a bad film he has been in, always lifting the bar of professional acting and film production.

We spoke to Abel ahead of his highly anticipated new movie Click Click Bang, a re-enactment of one of the true stories he has told on his YouTube channel. The movie is his second script, following another one released last year titled A Grand Little Lie.

In recent years, Abel has used his influence to raise the profile of a number of causes important to his heart. His Mkurugenzi show is devoted to telling relatable life stories that leave people thinking about the situation in a more critical way. He has also been one of the biggest voices advocating for proper parenting, especially building on dad-daughter relationships.

WoK spoke to Abel to ask him about his journey, his motivation and perhaps the biggest scare of his career, the COVID-19 pandemic. Here is what he had to say.

A lot of people know you as an actor, from the days of Tahidi High. What else do you do?

Other than acting, I am also a film director and producer. I run my own film production company called Philit Productions with my partner Philip Karanja.

When did you start acting?

I began acting when I was very young. I remember taking part in school kits in primary school throughout secondary school. I just had a niche for entertaining people, so I found great joy in performing, especially in skits.

Where did this interest for acting stem from? Was it something you always dreamt of doing?

No, not really. I actually wanted to be a news anchor. I wanted to enroll in a Journalism class, but unfortunately, at the time of my application the class was full. That is when I opted to do a course in camera work and videography. When I did this, my interest for film just grew and I found myself doing it full time.

Tell us a bit about your journey as an actor

As I mentioned earlier, I was a performer from a very young age. I used to perform in skits and dramas when I was very young. One day I was spotted and scouted by acting agents while I was performing, and that is how I got to TV. I debuted on Tahidi High and later did the show The Real Househelps of Kawangware, where we then moved the show to air on Maisha Magic, which is a much larger platform.

From there I continued to direct and produce different shows including Sue na Johnie, then went ahead  to tell stories on my YouTube channel.

Do you have a favorite among the projects you have done?

It is difficult to choose just one, but I must mention Tahidi High and The Real Househelps of Kawangware, which I must say catapulted my career especially when we made it to Maisha Magic. I feel like the foundation laid by these projects was enough to make the rest of the journey smoother.

You mentioned storytelling as one of the things you do. How did that come about?

When COVID-19 hit, we were greatly affected as a company, since we solely dependent on Maisha Magic for income through the projects we did. Like the proverbial saying, we put all our eggs in one basket. It was a very tough time for us, because all our projects were put on hold because of the pandemic, and we did not have a plan B.

That is until my wife Judy suggested that we try online content creation through storytelling, since it is something I am very good at. So, we ran a few projects on this on my YouTube and it ended up being a hit. People related to the content and we ended up building a community around it. We did that for sometime purely online, then with the easing of restrictions we have been able to invite the community to live shows at the Nairobi Cinema. I must say that the reception has been very good, since this is a community of people who are organic and who truly enjoy and consume our content.

Drawing from your experience, how important is diversification in a creator’s career?

We did not know we needed to diversify and try other things until COVID-19 came. However, we embraced and accepted the fact that we needed to adapt to the new normal. We saw a chance and took it.

For a creative or anyone in any profession, adapting to a situation and adjusting is very important. We were able to reach very many people online during that time. So yes, diversifying your content to fit the current situation is very vital in this industry.

As an experienced actor, director and producer, are you happy with where the film industry is currently?

I must acknowledge the fact that there is some growth. Kenyans are embracing and consuming local content more and more. However, we are still very far from where we should be. For example, it is very sad that a lot people only recognize the late Olwenya Maina from the film Nairobi Half Life, which was done over a decade ago. That goes to show that most people are not in touch with the film industry. Olwenya had done many films since then, some of which have been very successful. But to see this ignorance of the film industry in Kenya is very disheartening. We definitely have a long way to go.

What do you think can be done to alleviate this situation?

First of all, as film makers in Kenya, we have agreed to work with what we have because there is barely any support from government bodies. Unfortunately, these bodies that are supposed to fund the industry barely do so, until they see proof of returns. If they do not see an opportunity to make money, they do not support us.

I think what can be done is for people to take the initiative to grow their craft regardless of the situation. I have watched films where people used very little resources to produce high-grossing blockbuster movies. This kind of confidence in the craft will help the industry to come up with creative content that is appealing to both the local and international audience.

Film production is a capital-intensive venture. For people who are not yet there financially, what can they do?

When we started our company, we did not have the high-tech equipment that we are fortunate to have now. It is not prudent to limit yourself and your creativity due to lack of sufficient funds. For budding film makers, my advice to them is to just work with what they have. Be creative and invest in your craft. It might not pay immediately, but you will definitely see results if you remain consistent.

Consistency is key. Do not lose focus or sway during the journey. Just remain focused and you will definitely see the fruits of your labour.

You have a movie premiere coming up. Tell us a bit about that.

We are premiering our new movie called Click Click! Bang! which will be screened at the Nairobi Cinema on the 15th and 16th July, 2022. The first screening was sold out in four days, but people can purchase tickets for through PayBill number 4076195. They can also choose their time of screening, depending on what time is most flexible for them.

This movie is based on a true story about a super talented footballer and orphan by the name Kev who has a sick sister. However, he was not able to fully exploit his potential due to different challenges he faced while growing up, including poverty, drugs and negative peer pressure.

I asked my followers and the Mkurugenzi community which story they would like to see brought to life in a movie, and that was the one that got the most votes. Our company has also made a promise to our followers to make at least two movies every year.

You are a man that wears many hats, Abel. What keeps you motivated?

I am mostly motivated by my fear of poverty. Whenever I feel like sleeping in or slowing down, I get reminded of where I have come from, having grown up in poverty. My fear of going back to that situation makes me toil even harder.

What is your message to the youth out there looking to make something of themselves?

My advice is, be consistent. Practice consistency in all you do. Nothing in life comes easy, so whatever you are good at, do it to the best of your ability and be consistent. This will surely pay off in the end.

Sarah Joslyn: Meet The House Help Who Inherited Sh74 Million From Her Boss

Michael Oyier: How MC Who Presided Over Azimio Manifesto Launch Battled 7 Years of...

Pampered Village: A Tour Inside Alex Mwakideu Restaurant In Kitengela