Like everyone else, Bob Collymore is no exception when it comes to friends. The late CEO of Safaricom had his boyz or buddies that he kept close and loved as family. Collymore’s boys’ club was introduced to the public after the demise of the former corporate boss.

Collymore passed away on July 1, 2019, at his home in Kitisuru and his demise was felt across the country, thanks to his role and influence through the telco.

In this article, WoK takes a look at where members of Collymore’s boys’ club are now. 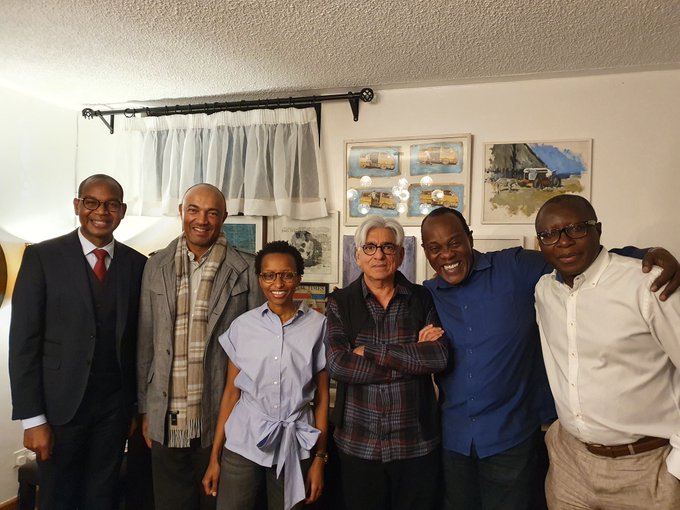 In the field of commerce and banking, Oigara is not a new face or name. He serves as the Chief Executive officer  (CEO ) and managing director of the KCB Bank Group. The father of 3 graduated from the University Of Nairobi with a bachelor of commerce.He has made a tremendous impact as the CEO of KCB bank including; He launched M- benki ,KCB Mobi-loan and launched mobile app with increased features.

Oigara met Bob when the deceased reach out after he (Oigara) became the youngest CEO of a bluechip company in 2012. They shared the challenges of taking over leadership amid high expectations from Kenyans. Bob had taken over from Michael Joseph who had already done exploits at the firm.

Since then, he has been a loyal member of Collymore’s boys’ club.

Well known as PQ, Mr Patrick is a Ghanian Kenya-based entrepreneur. He is the founder and Chief Executive Officer (CEO) of Radio Africa which is an umbrella for 6 Kenyan radio stations including; Kiss 100, Classic 105, Radio Jambo, X FM , East FM and Relax FM and 2  televisions Bam ba Tv and Kiss TV.

Quarcoo a member of Collymore’s boys’ club described Bob as a man who against all expectations won and succeeded wildly in making friends, family and a whole nation love, respect and esteem him.

“When I was first introduced to Mr. Robert Collymore he had two strikes against him. First, who could fill the phenomenal shoes of the legendary, visionary, committed, fiery, blunt, and driven Michael Joseph? The other strike I will not talk about,” he wrote on a segment on The Star in July 2019.

Quarcoo noted that Bob was a man with relentless commitment to excellence and hard work who created a new higher and noble purpose for Safaricom – serve the customer, serve the society, change lives and build employees.

“He made everyone aspire to be better with humanity, his deep warmth, unvarnished honesty and his humility.

“He also did something uncommon – he forged deep and lasting bonds. I somehow found my way into a small company of highly driven men – leaders of industry, diplomacy and media – which became the Boys Club.  Bob and I shared the burdens of each other but quickly I realised we both collected African art and loved jazz. He was wonderfully talented. He painted beautifully and played the saxophone that he loved like a child with a lollipop,” Quarcoo wrote. 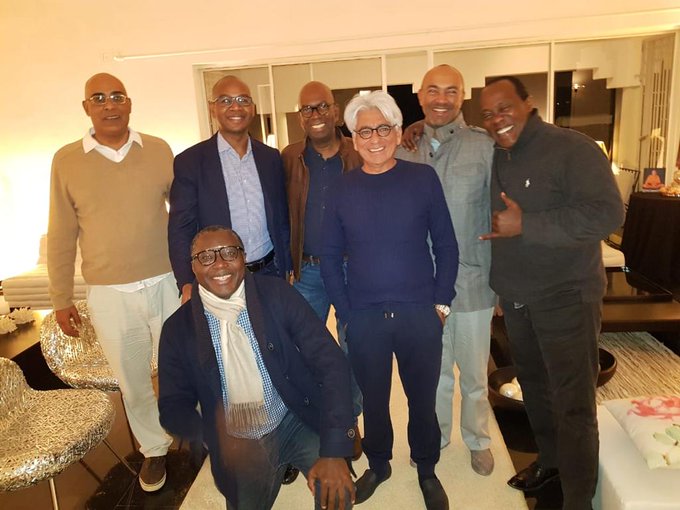 The veteran journalist is a news anchor at Citizen TV and radio presenter at HOT 96 FM. The former CNN reporter has won the Tuzo award for news and documentary Emmy Award for outstanding live coverage of a current news story- Long form.

Jeff and Collymore were good friends. He was among the inner circle that enjoyed days out with the late former Safaricom CEO, and the group that kept him company throughout his illness.

On Collymore’s first death anniversary, Koinange shared a picture of the group together with Bob’s wife and thanked her for the gesture even as he promised to keep his memory alive.

“One year later, our captain’s spirit lives on through his amazing wife, Wambui Kamiru and the boys club. Thanks for bringing us together Wambui! We shall continue to keep celebrating Bob,” he tweeted.

He’s a renown investor and author in finance with a passion for the development of Kenya and Africa as a whole.

Nicknamed “Muthungu” by his  Gatanga constituents, Peter Kenneth is a politician-cum-entrepreneur. He has major interest in farming, insurance, real estate and manufacturing.

On Thursday, May 5, 2022, the ruling Jubilee Party nominated Kenneth as one of their preferred running mate candidates to deputise Azimio La Umoja – One Kenya coalition Presidential candidate Raila Odinga.

The announcement was made by Jubilee National Election Board, chairman Stephen Wandeto in a statement on Thursday, May 5, 2022.

“We refer to the above subject matter and forward herewith names of the persons proposed by Jubilee Party for consideration as Azimio La Umoja One Kenya Coalition Deputy President Nominees. Peter Kenneth and Sabina Chege,” Wandeto said.

When Collymore’s boys’ club appeared on JKLive on July 3, 2019, to narrate memories of their departed captain, they also selected Thakrar to replace Bob as their new leader.

“If he can’t fit in the shoes he’ll have to buy new shoes,” Kenneth joked.

Bharat was chosen by Bob to oversee his funeral plans, a role he took up soon after the corporate titan passed on.

He is one of the wealthiest individuals on NSE. He is the founder and CEO of Scangroup, East Africa’s largest marketing services group. The company offers services such as Advertising and Communication Services in Traditional Advertising, Media Investment Management, Marketing Consultancy, Public Relations and Experiential Marketing.

During his stint in the country, former UK High Commissioner to Kenya was a member of Collymore’s boys’ club.

He boasts over two decades of diplomatic experience working in international relations, peace and security. He also served as Director General, Transformation at the UK’s Foreign, Commonwealth and Development Office (FCDO).

At the FCDO, Nic held a range of senior management roles in the field and at headquarters, including British High Commissioner to Kenya, Africa Director – with responsibility for operations in 48 countries across the continent – Deputy Ambassador in Afghanistan, as well as positions within the British Embassies in Washington DC, Paris, Berlin and the Foreign Secretary’s Office.

“I am thrilled to have been chosen as International Alert’s next Executive Director.  Alert’s work combining local peacebuilding partnerships with global insight has never been more important, as our world faces the climate emergency, growing political polarisation, and the pandemic. In almost 25 years working internationally, I’ve seen the vital importance of peacebuilding approaches in preventing and responding to conflict.  I’m greatly looking forward to working with the Alert team, and all our partners, to further that mission,” Nic said.

International Alert’s Chairman Carey Cavanaugh said: “Nic is an outstanding leader and we are delighted to have him taking the helm of International Alert.  I believe his deep knowledge and experience, understanding of diplomacy and development, and proven performance in senior leadership roles ideally equip him to lead International Alert’s efforts across the globe to advance peace and help people in conflict.”