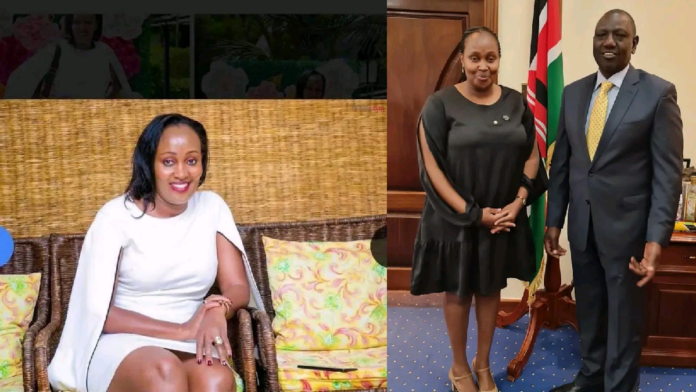 Carol Pulei is a Kenyan entrepreneur and the Chief fashion stylist at Naneuleshan Apparel. Throughout her illustrious career, Carol has had the opportunity and pleasure to work with the Kenyan political elite. Her clients include President William Ruto, former President Uhuru Kenyatta, Deputy President Rigathi Gachagua, among other dignitaries.

She is famed for her transformative looks that make our leaders look their best during campaigns, rallies and other public engagements. The infamous DP Gachagua’s ill-fitting look has now been upgraded into a more appealing one, all thanks to her efforts.

Carols journey has been an inspiring one, from working as a hotelier to chasing her dream to becoming one of the most sought-after designers in Kenya.

Here’s her story as told by WoK.

Unknown to many, Pulei did not start off her career life as a fashion designer. Prior to finding her footing as the reputable designer she is today, Carol worked as a hotelier for a while.

It is afterwards that she decided to use her savings to chase her passion for fashion and design.

Carol quit her job in 2013 as a hotelier to focus on her passion for fashion design. Armed with Ksh. 800,000 savings from her former profession, she embarked on a journey to actualise her life-long dream of becoming a fashion trendsetter.

In an interview with Parents Africa, Carol Pulei revealed that she creates and makes her own designs. She also imports mens clothes for sale. Since then, she has been able to create a name for herself and her brand. She has established her brand as the go-to place for bespoke suits and other mens wear.

Narrating how she got to be President Uhuru Kenyattas stylist, Carol had former Nairobi County Governor, Mike Sonko, to thank. She disclosed that Sonko had suggested that she could dress the President, so she made a shirt for him as a present, and the Governor gifted it to him.

That is how she gained the President as a client. Later she went ahead to receive numerous orders for bespoke shirts during the political campaigns for various politicians.

Procedure Of Importing Goods from Overseas to Kenya

Celebrating Eddy Njoroge: The Man Who Steered KenGen To Profitability