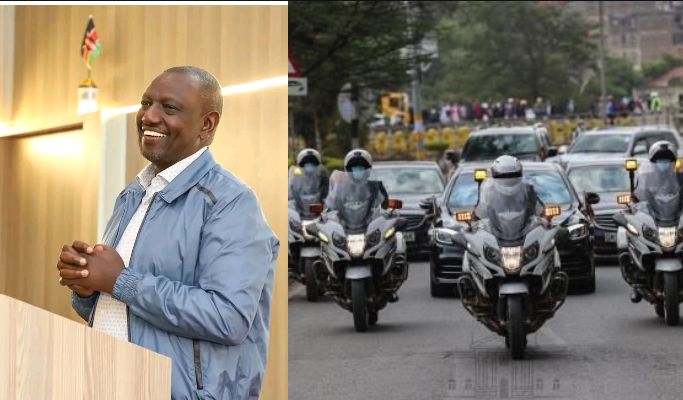 After the seven bench Supreme Court of Kenya (SCOK) unanimously ruled against the presidential polls petitions of 2022, the road to Statehouse for President-elect Dr. William Ruto has now been cleared. For now, Ruto awaits the swearing in that will take place on 13th September, 2022 for him to be officially referred to as the country’s Commander In Chief (CIC) of the Armed Forces.

On matters security, the fifth president will directly receive briefings from the Inspector General of police, the National Intelligence Service (NIS) and the Chief of Defense Forces. Additionally, the number of officers protecting him will now increase from 45 (for the deputy president) to approximately 200 who will also guard the first family.

The Presidential Escort Unit (PEU) which is under a commander will directly provide security for the president. The PEU is made up of specialised and skilled members mainly drawn from the dreaded Recce Squad of the General Service Unit. Recce Squad commandos are usually officers who exhibit high skills during training of the country’s recruits at Embakasi.

To set the bar higher, they are often taken for elite paramilitary training at Magadi Training Camp, Solio Ranch and Ruiru College. After this, they undergo specialised training held overseas in countries such as Israel, USA and UK. The various expertise acquired include sky marshalling, detonating and handling explosives and conducting rescue operations.

The Presidential Escort convoy will include a group of up to 6 skilled riders who usually control the speed of the entire team. Riders and drivers will have specialised training in defensive driving, war and combat. Before the president uses any route, there will be scanning to ensure everything is safe.

The motorcade will most time move in a certain formation such as the wedge, box and diamond that offer 360° protection to the country’s first in command. These arrangements are such that if any threat were to be initiated to the president then the officers of the escort would be the first to be affected.

Sometimes, the president will have up to 5 bodyguards offering security to him. These are: the principal on the front, two flanks by the side and the rear who will be behind the president. Additionally, a detail leader will be on the right of the CIC and will never be positioned more than an arms length.

Heavy Security During Swearing In Ceremony

During the swearing in ceremony, it is expected that various roads will be closed to ensure swift movement of the president-elect and other foreign dignitaries. The National Intelligence Service (NIS) will gather intelligence information especially in the proximal areas of the venue for several days before swearing in of the president.  The elite GSU Recce squad will provide security to the head of state. There will be various agents brought into task such as Bomb Disposal Unit to handle any threat from explosives and Anti-Terrorism Police Unit to counter any terrorist attacks. For crowd control, members of the Kenya Police, Administration Police and National Youths Service (NYS) will ensure maintenance of order.

Read Also   Josiah Frost: Man who was denied lucrative job for being taller than President Moi

CURE Kenya: An Inside Look At How Kijabe Hospital Is Impacting Lives Of Kenyan...