Occasionally a few people emerge and win over the hearts of many for their selfless acts and Kenya Defence Forces (KDF) officer Juma Galgitheel is one such individual. When not dispensing his duties, he doubles a teacher at a local primary school along the Kenya-Somalia border.

By sacrificing his time and committing to teach pupils at the local school, he has endeared himself to the hearts of his students as well as locals.

Speaking during an interview with TV47, Juma stated that the region experiences a serious language barrier since a majority of people don’t speak Swahili and they found it hard to communicate with the locals.

“You can go to the shops but the people don’t speak Swahili so we don’t understand each other,” he stated.

Juma noted that before he was deployed in Khorof Harar, he had been told that the area is highly insecure and experienced content attacks from Al Shabaab militia. This made him and colleagues cautionary when he first arrived in the area.

He noted that he walked around due to the insecurity in the region.

“I have been here for close to two years and I have got to work with the locals. People here are not as bad as we used to be told,” he said.

Juma notes that he was determined to help people in the region quench their thirst for education.

He approached the community and the teachers and asked to help at Khorof Harar Primary School as a teacher for Kiswahili.

However, at the start, pupils were afraid of him because of the military uniform and the gun he carried around, therefore, to ensure the pupils were calm and confident around him, he settled on the camouflage KDF uniform and doesn’t carry his weapon to the school anymore.

Juma also got the blessings of his bosses at KDF to assist the pupils in the area achieve their academic goals.

He notes that to do what he does needs courage, perseverance, and committment.

Juma has been highly praised by locals and teachers in the community for his service towards them. Khorof Harar Primary School Headteacher Suleiman Jumale describes him as a very good teacher who is loved by all and committed to his work.

“He is a very good teacher who has support from the community. For the short period he has been with us, we have felt his impact. The performance is Kiswahili has gone up since he came,” Jumale stated.

However, the biggest concern for the locals as well as himself, is what happens when he gets transferred to another duty station. Juma notes that he has grown attached to his students and so have they towards him.

To ease the pain of his departure, Juma notes that he will not inform his students that he has been transferred, instead, he would go home, and leave the students thinking that he may have gone on leave. 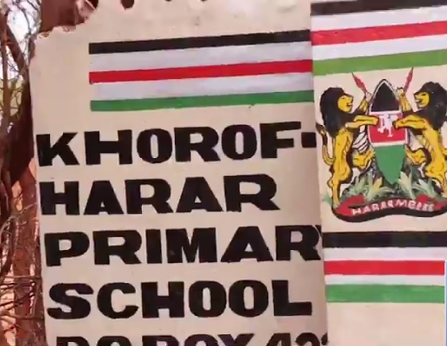 Clubs And Entertainment Joints Changing The Face Of Kitengela