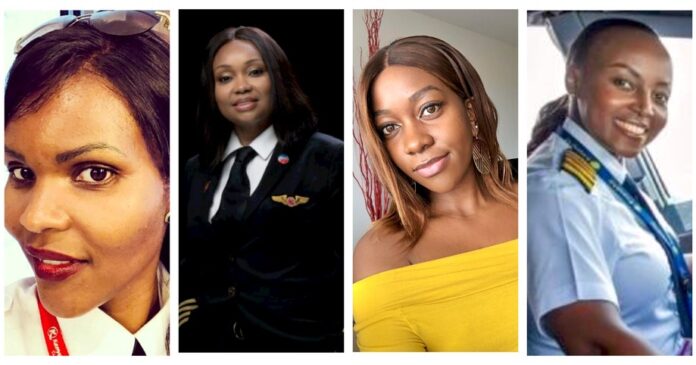 Female pilots were a novelty in Kenya. This greatly changed in the late 20th century as women in the country began to slowly creep into this field. Today, the number of Kenyan women flying different aircrafts to various destinations across the world has tremendously grown.

In this article, WoK has listed women who dominate the skies.

Having a father who was a pilot, greatly influenced Capt. Irene Koki Mutungi to take up the career. At first, her father was reluctant to let her join the profession which he thought took too much time away from family. Eventually, she got her Private Pilot License in Kenya in Kenya before proceeding to Oklahoma for her Commercial Pilot’s Licence. She became the first female pilot to be employed by Kenya Airways and remained the only female pilot at the airline for six years. A woman of firsts, she was also the first female in the whole of Africa to become a certified pilot of the Boeing 787 Dreamliner. She had also been the first African woman to qualify to command the Boeing 737 in 2004 and is also qualified to command the Boeing 767.

In 2014, Forbes Magazine named her among the 20 Youngest Power Women in Africa.

She is a captain of the Boeing 737. From the time she was a kid, she dreamt of being a pilot. Captain Ruth Karauri loved how pilots dressed in the KQ commercials on TV and decided it was what she wanted. However, after high school, she was headed to the University to pursue a degree in Electrical Engineering when fate interfered, KQ advertised positions for Ab initio pilots. Out of the 3,000 people who showed up for the interview, she was lucky to be among the 250 called for the second interview. After passing the interview, they flew to Addis Ababa where they were trained before being absorbed by KQ.

Today, not only is she known for her prowess in flying but she also serves as an inspiration to many.

She is a captain and Type Rating Instructor with KQ. She pursued and qualified in both flight classes and maintenance. In 2002, she had finished her flight classes, engineering classes and had qualified to be an instructor. The following year, she became an instructor and in 2005 began flying. In 2006, she became a captain and in 2010 joined Kenya Airways.

She was blessed to have a father who believed in her dreams and took her to flying school right before she could do engineering. She did both and took her first ever flight in 1998 while still in flying school.

Louisa Imbuga is the first officer of the Boeing 737. She is also a writer of children books and the daughter of renown playwright, the late Francis Imbuga.

She made history in 2006 by becoming the first female pilot in the Kenya Air Force. She joined the military as a cadet and graduated in 2003 as a second lieutenant.

Growing up in a family of eight, her dream was to fly in the skies.

“Our home sat under an airway for planes going to western Kenya. Watching them zoom past at exactly 6am and 6pm daily helped me make up my mind early on that I wanted to become a pilot,” she was quoted by Nation.

She flies for Rwanda’s national carrier, Rwanda Air and was the first woman to command Rwanda Air. Born and raised in Kenya, she attended Loreto High School, Limuru. While waiting to join college, she chose to attend an aviation school in South Africa. She joined Rwanda Air in September 2012 and was promoted to captain barely a year later in May 2013. She became the first woman in Rwanda to be made captain.

Other notable mentions include:

Pst. Ezekiel Odero Shares Secret On How He Made Ksh 6M In Just Two...

CJ Martha Koome in a tight spot less than 15 days in office!