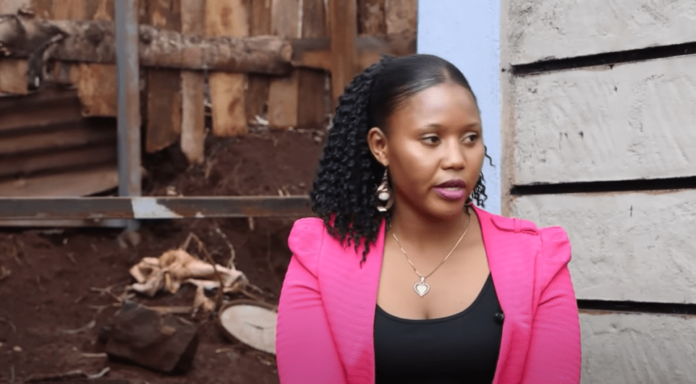 The media has for years been awash with horrific stories of Kenyan housemaids in Saudi Arabia going through horrific ordeals at the hands of their employers. From untold torture to deaths, dozens of victims and family members have shared what you would call experiences straight from hell. While the horror stories are there, dozens have also changed their lives for the better. This is the case with Mary Wanjiru who does not regret her eight years in Saudi Arabia. To her, Saudi was a blessing to both her and her family.

She was born in 1992 in Limuru as the second born in a family of eight children. Life was hard for the family that lived in a mud house before moving to a timber house. Her father herded livestock while her mother sold kales. They would wake up early in the morning and help with tending the kales farm before going to school. She attended Manguo Primary School followed by Kinyogori Secondary School.

Her elder sister traveled to Saudi Arabia for greener pastures and had no issues with her employers. She would call the family from time to time. This inspired Mary to travel to Saudi in search of greener pastures. Three months after high school, she was ready to travel out. Of course, she had heard the horror stories but there was also the fact that her sister was okay. She also had great faith in her parents prayers over her safety.

She boarded a plane to the gulf with no form of training since it wasn’t offered in the past. On arrival, she met the family and ate dinner with them before retiring to bed. They processed her identification and she would use her boss’ phone to communicate with her parents. She did this until her identification papers came through and the boss bought her a mobile phone which wasn’t deducted from the salary. For two and half years, she dutifully did her work and communicated with her parents and even sent money home. Her salary at the time was Sh20,000.

After 2 and a half years, she wanted a salary raise but they couldn’t come to an agreement with her employer. Avoiding trouble, she finished her contract and came back to the country. Within a few months of staying, she saw how hard life was without a job and went back to the agent who organized for her to fly back to Saudi. This time, she went to a different family and continued with the hard work, all while saving up as much money as possible. Her salary was Sh31,000. She would only touch her phone during her 2PM off time and at night while in bed. Her younger sister also traveled to gulf, but a different country and her younger brother later joined her in Saudi Arabia to work as a driver.

They came together and built rental homes in their family home and afterwards the four of them pooled resources to build a two-storey home for their parents. The siblings also set up an animal feeds business worth Sh300,000 for their father.

Return to Kenya and Advice

After eight years in Saudi Arabia, Wanjiru was ready to return home. Her employers were sad to see her go they still communicate to date. They even arranged a small party where she got to cut a cake before her return.

The mother of one says she would gladly return to Saudi especially if her daughter was old enough. According to Wanjiru, there are bad employers as well as good ones as just like in any other part of the world adding that people need to know their priorities and not misbehave while there. They shouldn’t steal or seduce people’s husbands. They should also avoid spending time on the phone instead of working.