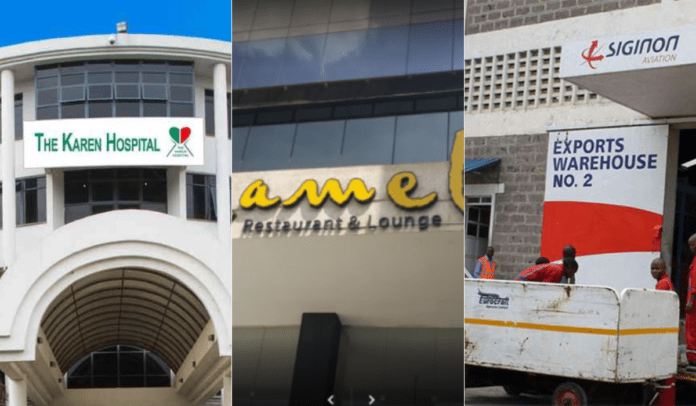 Kenya is home to some of the wealthiest individuals in the region and in the continent of Africa. Often, we come to learn of the paths these individuals treaded before making it into the exclusive billionaire’s club.

These individuals boast investments cutting across various sectors of the Kenyan economy through various companies, individually or family-owned.

In this article, WoK takes a look at multi-billion businesses owned by former police officers who defied the odds to join the elusive club.

Kulei was an aide to late President Daniel Arap Moi.  While Mark Too handled Moi’s political assignments, Kulei was charged with handling the former president’s financial and business matters. The two are even said to have held interests in various companies together.

Siginon CFS is a customs licensed terminal in Mombasa located approximately 5 kilometres from the Port of Mombasa. The CFS facility serves both importers and exporters, both local and transit goods imported and exported in shipping containers or in loose form i.e. in bulk.

Kulei also has a 38 per cent stake in Standard Media Group which owns KTN News, KTN Home, and Spice FM, among others.

The late Mageria attended completed his secondary education at the prestigious Alliance High School in the 70s and proceeded to join the police force where his colleagues say that he was a man driven by honesty and integrity.

He rose through the ranks to become a Commandant of the famous Kiganjo Police Training College in 1996. He later came to Nairobi where headed the city’s traffic department. He held various roles and positions during the late Mzee Jomo Kenyatta’s regime including the Chairman of the Agricultural Society of Kenya (ASK).

Mageria was a co-founder of Karen Hospital. He was also among the owners of the land that Daystar University sits on.

Billionaire businessman-cum-politician Jimi Wanjigi is a man who needs no introduction, however, few know how the presidential hopeful started out. According to the National Police Service (NPS), Wanjigi joined the ranks as a police reservist and worked his way up to the role of inspector before his unceremonious dismissal. He, however, kept his guns after the termination and NPS explained that he was dismissed for “threatening other people”.

The businessman has since built himself a multi billion empire with interests in various sectors of the economy, most notably, Kwancha Industries.

Kwacha – a multibillion family business empire, is a holding firm for other several businesses owned by wanjigi’s family. According to reports, the company has shares in Barclays Bank, Total Kenya, Kenya Airways, East Africa Cables, and Carbicid investments. It also owns Kwacha Real Estate investments with housing investments in Nakuru, Karen and Ridgeways as well as the Kitamaiyu, Murang’a and Nyeri coffee estates.

Wanjigi is also said to own the little is known TYL Limited, however, information in the public domain indicates that the company transacts business in the billions of shillings. Further reports indicate that TYL deals in tendering of government projects worth billions.

The billionaire businessman also owns the Caramel restaurant which is considered as one of the most prestigious restaurants in Nairobi. It features exclusive meals and offers ample security to its customers. This lavish restaurant is located at the ABC place in Westlands.

The former Kilome Member of Parliament is among the wealthiest people in the country with interests in various companies. Before the billionaire businessman settled for life in business and politics, he had started out in the force.

Mwau dropped out of school and in 1968 joined the police force. At Kiganjo Police College, he discovered his impressive marksmanship skills becoming one of the best sharpshooters Kenya has ever produced. He later became a sports shooter, competing at the 1968 and 1972 summer Olympics. In 1968, he competed as a rifle shooter while in 1972, he competed as a pistol shooter.

According to various reports, Mwau has interests in a number of companies where he was also the director. These entities include;

A report by Forbes in 2016, indicated that Mwau sold his 7.7 per cent stake in Nakumatt Supermarket for a reported sum of $10 million (Approximately Ksh1 billion at the time). The businessman did not comment on these reports.

Four most popular under 1000cc cars in Kenya