Meru Governor Kiraitu Murungi is no stranger to Kenyans having served in government for over two decades as a member of parliament, cabinet minister, senator, and now governor. The veteran politician is considered one of the most prominent leaders from the Mount Kenya East region and a formidable political ally for those coveting the house on the hill.

Like many other leaders in the country, the Havard University-educated politician is among the wealthiest individuals in Kenya and is known to own various properties in different parts of the country.

In this article, WoK takes a look at hotels that have been associated with the Meru governor.

The high-end city restaurant is reportedly owned by Governor Kiraitu.

Located at the heart of the Nairobi business district, the restaurant is one of the leading in the city serving a blend of African and international cuisine.

While offering both an affordable and a competitive Menu, it stands out to be one of the top restaurants with its clientele ranging from walk-in guests to office deliveries to corporate events.

Azuri restaurant has other outlets at Imenti house and at the Nassab building in Lenana road.

Nkubu Heritage Hotel is located in Meru, Kenya. It is situated in a serene environment and 87 Kilometers from Meru National Park. The hotel is reportedly also owned by Governor Kiraitu.

Local and continental dishes and drinks are provided through the on-site restaurant and bar. Outdoor dining services are also available in the hotel.

Meru Town is a 20-minute drive from the hotel.

The hotel has a wide range of high-end facilities including an Olympic-sized swimming pool that can accommodate both pro swimmers and beginners. There is also a separate swimming poll for children that has limited depth.

Nkubu heritage Hotel has a team of highly skilled individuals at the core of the business to handle all reservations for the hotel across all enquiries.

This efficient team is responsible for capturing the reservations in the appropriate system and then notifying the relevant department of any special events or requests.

This allows for a seamless process and ensures that the guest’s stay is a memorable one!

Nkubu Heritage Hotel provides a state of the art banqueting and conference facilities with a range of meeting and function rooms (both indoor and outdoor) equipped with the latest audio-visual equipment.

The conference and meeting rooms can accommodate more than 250 guests, each planned to suit the client from the themes to customized menus and a professional event management team.

Nkubu Heritage Hotel boasts of 43 well-furnished and en suite rooms with capacity of up to 88 bed occupancy.

The Hotel has a spacious ground with a neat, well cut and manicured garden suitable for outdoor events such as weddings and garden ceremonies, with a modern setup that makes everyone wish to have a memorable and unique wedding.

This comes with walkways and accessibility to refreshing rooms. The gardens can be used to relax as well as for private functions.

The hotel organizes tours and safaris for guests wishing to explore the eastern side of the snow-capped Mt. Kenya, which include Mt. Kenya climbing, game drives to Meru National Park and Lewa Conservancy, exploration of the vast Samburu Game Reserve, site seeing;

To nearby waterfalls, scenic areas, traditional sites and villages, excursions to miraa, tea and coffee plantations among others. 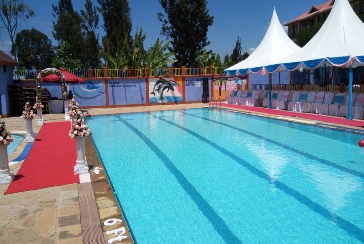 Though the hotel has been associated with the governor, he is yet to publicly confirm or deny the reports.

At the height of the Covid-19 pandemic, Governor Kiraitu reportedly identified the Ksh184 million hotel which was still under construction for use as county offices. At the time, Kiraitu stated that he saw it wise to change it to staff offices because there was no need for the public sector to compete with the private sector.

“After consultation with the Investment and Environment Corporation of Meru County, we thought it was a better idea to convert this into offices for Meru County instead of running a hotel.

“Government should not compete with private sectors because Meru already has good offices,” Governor Kiraitu stated.

He also expressed displeasure at how top officers in his county were being accommodated, saying they deserved better.

“Our officers in the county government are not properly accommodated, so we had a discussion with owners of this premises and contractors to convert this to an office block.”

The Governor added that there were several hotels in Meru that had been constructed by the National government and were not making money.

“…they all collapsed. None of them made money. It is better business to operate as an office block and pay rent,” he remarked as he inspected the construction site.

The hotel, however, seems to have resumed operations after the Covid-19 infection rate went down.

Mohamud Salat: The 36 Year Old CEO At The Helm Of HASS Petroleum

James Kagambi: Meet The 62 Year Old Who Became The First Kenyan To Climb...

The Kenyan Tycoons Who Own Multi-Million Nightclubs In Nairobi