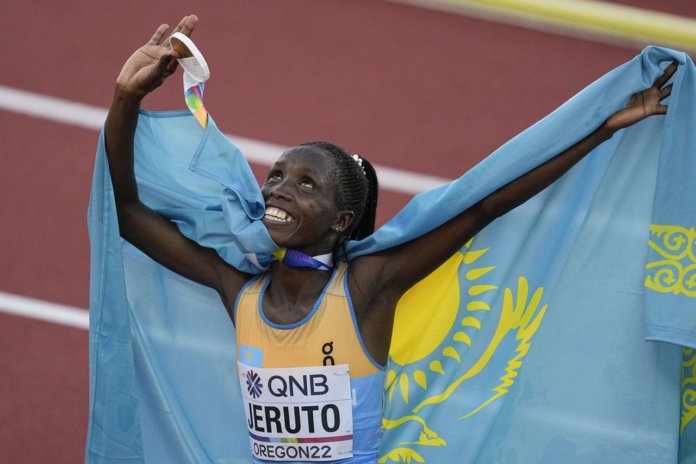 Norah Jeruto has made headlines after winning the first ever gold medal for Kazakhstan in the just concluded World Athletic Championships in the women’s 3000m steeplechase.

Like other Kenyans before her, Jeruto has excelled in athletics, albeit representing another country, Kazakhstan. Her move to transfer allegiance from Kenya in March this year came as a shock to many, as she opened the year with an impressive win at the Valencia 10km run in Spain and the Discovery Kenya Cross Country Championship in Eldoret.

In 2011, Jeruto made her international debut at the 2011 African Cross Country Championships, where she came sixth in the junior race to complete a Kenyan sweep of the top six.

She ran the third fastest time ever in the 2000 metres steeplechase at the 2011 World Youth Championships in Athletics, recording 6:16.41 minutes to take the gold in spite of a heavy fall at the waterjump.

Later that year, she claimed the steeplechase title at the 2011 Commonwealth Youth Games, and a bronze in the 3000 metres flat.

At only 15 years old, she set a 3000 metres steeplechase best of 9:45.1 minutes, but struggled to improve on that in subsequent seasons.

After a runner-up performance at the Kenyan Athletics Championships, Jeruto made her senior international debut at the 2016 African Championships in Athletics. A personal best run of 9:25.07 minutes at the competition brought her the steeplechase gold medal and a championship record.

Despite her ranking, Jeruto did not participate at the 2020 Tokyo Olympics, because she was still waiting for her allegiance to Kazakhstan which she obtained on 30 January, 2022. The move received mixed reactions from her fans and Kenyans as well, with many condemning the move to change allegiance to a foreign country.

On May 28th this year at the Prefontaine Classic in Eugene, Oregon she ran the third fastest time ever by a woman at the 3000m steeplechase in 8.57.98, setting a world lead.

Her most recent win is on 20th July, 2022 when she became the first athlete representing Kazakhstan to win at the World Championships in Eugene, establishing a new championship and national record of 8:53.02.

WAPEK Delicacies: Inside The New Restaurant Owned By Jalang’o And His Wife

Madatally Manji Biography: From Hawking In Karatina To Owning House Of Manji