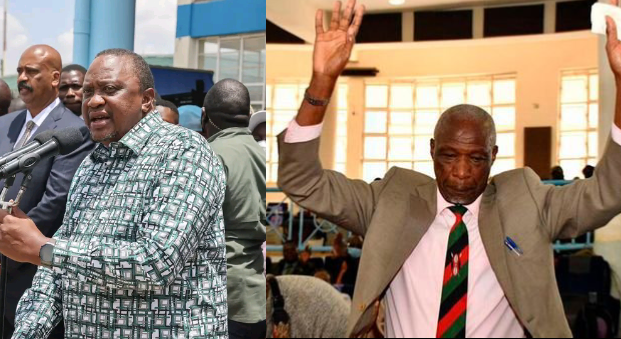 In mid February, 2018, Professor Paul Kuria Wainaina fully took over the office of the Vice Chancellor at Kenyatta University. It was a colourful ceremony that saw him chauffered to the institution’s main campus in a luxurious Toyota Landcruiser V8 automobile.

The elated professor was met with a multitude of people at the institution’s main gate as soon as he disembarked from the vehicle. He received a bouquet of flowers before the atmosphere transformed into songs and dances. It was now official that Paul Kuria Wainaina was the sixth VC of Kenyatta University after serving in acting capacity for two years.

Fast forward to 2022 and his triumphant entry is the opposite of his exit punctuated with an outpouring of emotions and tears. Wainaina is reported to have been dismissed of his duties for ‘insubordination and misconduct’ even as other sources indicate that he may have resigned. The reason for this is a tussle for a 400 acre piece of land held by Kenyatta University which the government has ‘strategic’ interests in.

Trouble brewed when the government indicated that it wanted the VC and the University Council to give part of the institution’s land for various infrastructural developments. According to a letter penned by the Head of Public Service Joseph Kinyua, the university through the council and the VC had to cooperate and allow the Ministry of Lands go forward and subdivide the land.

“As noted therein, the cabinet meeting held on 12/5/2022 resolved to approve the allocation to strategic interventions under the Ministry of Health”

“The decision was premised not only on the fact that Kenyatta University is holding large tracts of unutilized land but more strategically because the planned interventions have a nexus to Kenyatta University’s academic and response programme,” reads the letter.

The land in question with title deed number LR 11026/2 was to be subdivided as follows:-

The soft-spoken VC held a meeting with the University Council and the latter indicated that they had no capacity to cede the institution’s land. Their decision must have irked a number of powerful government officials drawn from different ministries. This led to a flurry of letters from Nairobi to the Kenyatta University administration. To make good their intention, the government asked the Vice Chancellor to surrender the institution’s title deed to the Ministry of Lands for excision. Moreover, the Ministry of Education joined the ring imploring Kenyatta University to loosen the noose around the said land.

“We were called in the Ministry of Education by our CS and we were told we had to cede land to the hospital because (the) cabinet  met and the decision had been made. Again we went as council, we were not convinced by our CS,” said Prof. Wainaina on 12th July, 2022.

He added: “We were told to go back and write. We told the CS that council has the capacity to preserve but not to cede land.”

In 9th July, a provoked President Uhuru Kenyatta made public his frustration over the matter saying he was going to deal with certain individuals ‘swiftly and effectively.’

“You are claiming that this is your land yet this same land is owned by Kenyans. You want to hinder this project but I still have three more weeks in office, we shall deal with those individuals swiftly and effectively. I will go home with them,” said Uhuru.

And barely 24 hours later, it is reported that an NYS bulldozer was at Kenyatta University main campus pulling down a wall that separated the institution from the KUTRRH. This happened in the ungodly hour of 12.30 a.m under tight security.

On Tuesday, 12th July, 2022, Wainaina was forced to hold a meeting with KU staff detailing the whole issue. Already the government had suspended him for 30 days and plans were in place to have a new university council in place.

“Probably this is the last time I will be talking to you as a VC. I understand that a new council is being formed. I thought I needed to tell you whatever is going to happen is because I have refused to cede land of KU,” he said.

Read Also: Higher Learning Institutions In Kenya That Went Under

Salary Of Kadhis And Chief Kadhi In Kenya

Anne Ngugi: Abandoned By Friends When She Was Fired At K24, Now A TV...