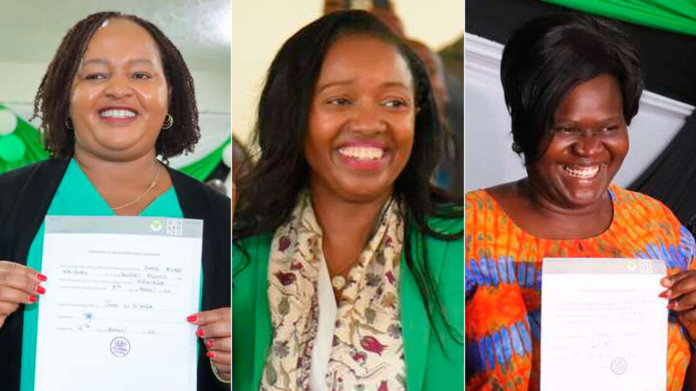 Women are often famed for being their partners’ pillar of strength and strongest support system. The reverse can be said about men, especially those that stand by their wives’ goals and pursuits.

The just concluded August 9 polls brought out a new breed of leaders, especially women. Occupancy in Parliament, Senate and the Council of Governors has increased, moving the country closer to achieving the two thirds gender rule.

During their victory speeches, the seven elected female governors, in particular, attributed their achievement to their significant others. Read on to find out more about the Governor’s spouses and the businesses they run-and their professions.

Susan Kihika, Nakuru Governor-elect is one of the seven female governors elected in the August 9 polls. She is married to Sam Mburu, a Nakuru-based businessman who has heavily invested in the real estate sector.

Mburu is a director of Landmark Freight services which is based in Mombasa and has two branches in China. The company reportedly makes Ksh. 10 million in monthly revenues.

He is also into the rental business and has several properties strewn across different locations. He was raised in Solai, Nakuru where his parents had a charcoal burning business. The businessman himself is also said to have started off from humble beginnings working as a soft drinks distributor in Nakuru.

The couple runs Kamankura Records which turned to Baite Family, encompassing Baite TV and Baite Records. The two also run the Baite Family Church where they both minister, attracting congregants through the music-filled broadcasted church services.

While launching her quest for the Homa Bay gubernatorial seat in February 2022, Wanga introduced her husband, George Wanga, in public for the first time amid cheers from the crowd.

The two met while at Kenyatta university where both were in pursuit of their dreams.

George Wanga is as well a successful business person who has focused in achieving his dreams in the business world. He is believed to be in the banking and finance industry.

In her historic rise to Kwale county’s top seat, Fatuma Achani was able to edge out her fierce competition, garnering 59,674 votes against ODM’s Hamadi Boga’s 53,972. Apart from her political career, Achani is an advocate of the High Court and holds a law degree from Moi University.

While giving her victory speech, she attributed her success to the pivotal role played by her husband, Ali Kanga, a businessman.

Her husband, Dennis Apaa, is a renowned businessman who has a wide range business interests in Nairobi. He has a company known as BroadVision Utilities Ltd that was at the centre of kshs50 million scam at the Ministry of Water and Irrigation in 2014.

Kamotho and Kirinyaga Governor Anne Waiguru share a twelve-year relationship, and officially made it official when they got married in 2019. In a past interview, the Governor revealed that her husband and her reside in different houses. While this may come as a shock to many, the Governor clarified that this is because of politics logistics, security and safety concerns.

Kamotho is a constitutional Lawyer, Advocate of the High Court and Commissioner for Oaths and Notary Public.

Wavinya Ndeti recently made history by succeeding Alfred Mutua as the next Machakos Governor. Wavinya has held various positions in government, and has allways attributed her strength to her husband, the late Dolamu Henry Oduwole.

While sending an emotional tweet in 2020, she reminisced about the anchor that her husband was during her most trying times saying, “If there is one person I really miss in my life is my husband, Prince Henry Dolamu Oduwole. This gentleman was a loving husband, father and real man. Rest peacefully darling till we meet again.”

Henry was born in a royal family in Nigeria, making him a Prince in the Dolamu family. He ran businesses all over the World including London, South Africa, Nigeria and Kenya.

Kenyan Poacher Made KSh 864.8 Million In The Illegal Sale Of Ivory And Rhinoceros...

Ugenya High School: The Success Story Of Little Known School That Sent All Its...