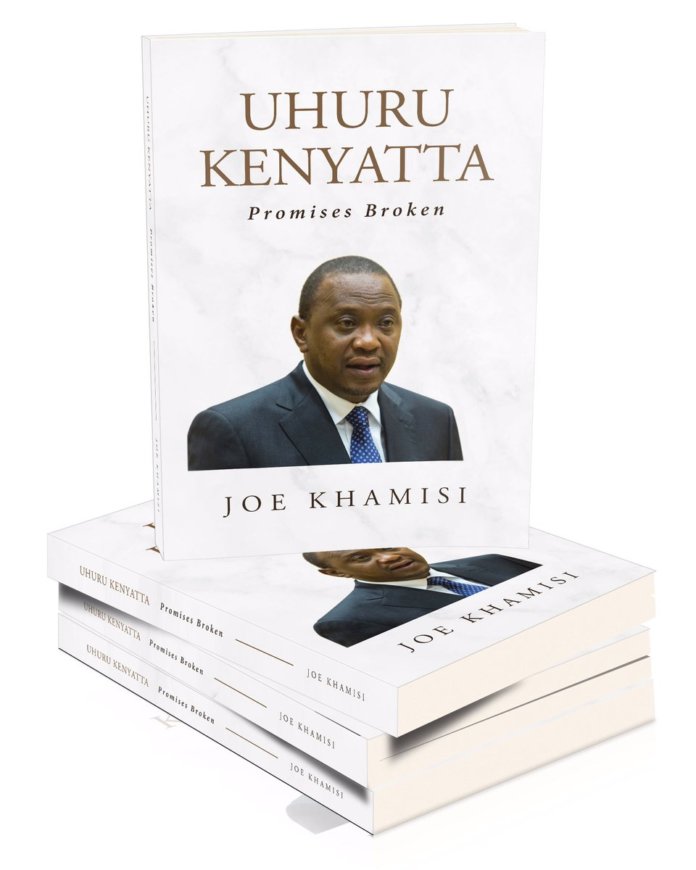 President Uhuru Kenyatta has been called both the best and worst president of Kenya. The President’s career has been shaped by unlikely political alliances and shocking scandals of corruption by the people he is affiliated with.

Blending up his experience as a journalist, writer and politician, Joe Khamisi captures President Uhuru’s political career in his new book Promises Broken. The book illuminates Uhuru’s eventful career in Parliament, as a Minister, his ascend to Presidency and the mistakes he has made along the way.

Khamisi also ponders the difficulties Uhuru has faced as President, his infamous fallout with his Deputy and weighs how certain decisions have brought the country to its current state. In this book, Uhuru emerges as a flawed and misadvised, a man who might have been wrong for this job.

Joe spoke to Wok about his new book, the motive behind writing it, and what he hopes for the future of Kenya.

When did you start writing?

I started writing books in 2011 with the Politics of Betrayal, but I have been a writer most of my life. I was a journalist. I worked with the East African Standard, the Nation, the Voice of Kenya, and the Voice of America. I also worked as chief editor of The Express and Business Times in Tanzania.

I was trained as a journalist at the Times of India training school in Bombay, now Mumbai, and graduated with a BSc in Mass Communication and government at the University of Maryland University College, in the USA. Writing is in my blood given the fact that my father was also a journalist. He was the editor of Baraza, a Swahili weekly, which was part of the East African Standard.

Which genre of writing do you focus on and why?

I am largely a political writer. Having been a politician myself, my interest is in governance issues. So, I research and write about the past and the present and the political players involved.

How many books have you written so far?

I have written seven books in total: the Politics of Betrayal, the Wretched Africans, Dusk before Dusk, the Bribery Syndrome, Looters and Grabbers, The Fall of a Dynasty (Fiction), and now, just released, Promises Broken.

Talk to us about your latest book on President Uhuru Kenyatta

Promises Broken is about our fourth president, Uhuru Muigai Kenyatta. It is not a biography or a memoir, but a review of his life with special emphasis on his ten-year tenure as president. It narrates his achievements and his failures including his failure to curb corruption, impunity, and theft of public funds.

The book has sections about his family and questions about the way the family accumulated wealth through the patriarch, Mzee Jomo Kenyatta, and his wife Mama Ngina. It also examines Uhuru’s association with people like Raila Odinga and William Ruto. Like all my books, the Promises Broken is well researched, informative, and resourceful.

What was the inspiration behind writing the book?

Promises Broken is a continuation of the political theme that is dear to my life, a theme that has dominated almost all my books. The future generation must be aware of our historical past. And because it is not a biography or an autobiography, the book does not pander to political interests. I am an independent writer who relies on facts. God willing, I will write more books touching on leadership and political dispensation.

What impact do you hope the book will have on your readers?

I cannot guess what the impact this book will have on readers. It all depends on how popular it will be. But my hope is that it will have a positive impact especially for leaders who want to avoid mistakes Uhuru made during his rule.

What are your thoughts on the current political climate in Kenya?

The current political climate is volatile. This is not unusual in an election year. What worries me is the role president Uhuru has chosen to play. By fully backing Raila as his favoured presidential candidate, Uhuru has plunged head on into the 2022 supremacy battle.

Everyone knows that he is doing this to protect his interests. He believes Raila, not Ruto, will protect his business empire. But what this has done is to create further polarization of the population. We are today more divided that at any time since 2007. This is not good for the country.

Do you think there is hope for Kenyans in terms of good leadership?

We have numerous Kenyans who could lead this country, but we seem to be circling around the same people who have been in politics for many years. We need to open further the political space so that new, more vibrant leaders, can have a chance to compete fairly with the old guard.

But, there is hope for the future. I believe, we are going in the right direction. The many young people who have emerged to contest the various seats, from MCA to governor, is a clear indication that young people are on the move to bring more meaningful changes in the country.

Where can people find the book and how much is it?

All my books are available at Nuria Store along Moi Avenue. The more established bookshops tend to shy away from my books because they say they are controversial and too sensitive to touch. Nevertheless, my books are selling very well through smaller African-owned bookshops.

What is your message to the Kenyan electorate now that we have less than 10 days to the polls?

I do not think I am qualified to advise Kenyans on what to do on August 9, other for them to exercise their fundamental right to vote. They should come out in large numbers to choose their leaders. Staying away should not be an option.

How To Start A Driving School in Kenya And Requirements

“I Became a Millionaire at 17 Years Of Age Through Academic Writing” – The...