Sam Ogina is a Kenyan journalist who currently works at Royal Media Services owned Citizen TV. Prior to this, Ogina worked at KTN as a political affairs journalist. He has kept his name away from scandals until his name was dragged in the mud by Eric Omondi as you will read elsewhere in this article.

The journalist was a student at Daystar University.

The journalist was a political affairs journalist at KTN from 2012 to 2016. He was poached from the station by Citizen TV alongside Mercy Kandie and KTN business editor Michael Karanja.

Ogina married his wife Njeri Priscacathy Ogina on 6 October 2018 at the All Saints Cathedral. On their first anniversary, the couple took to social media to celebrate their union.

One year down the line the smiles are still there. Thank you so much. A toast to many more and lots of love,” Ogina posted.

“We aced it love, one year down many more to go. Lots of love and blessings to you today and always.”

Revelations made by Jacque Maribe that Eric Omondi is a deadbeat dad has sucked in Sam Ogina. According to damning allegations made by the funnyman, Ogina was dating Maribe when he had a one night stand with her. In a long Instagram Post,  the comedian revealed that they got intimate after a few bottles of whiskey but insisted he used protection. Two months later, Maribe told Omondi that she was pregnant. From his post, the comedian seemed to suggest that Ogina was the father of Maribe’s son. 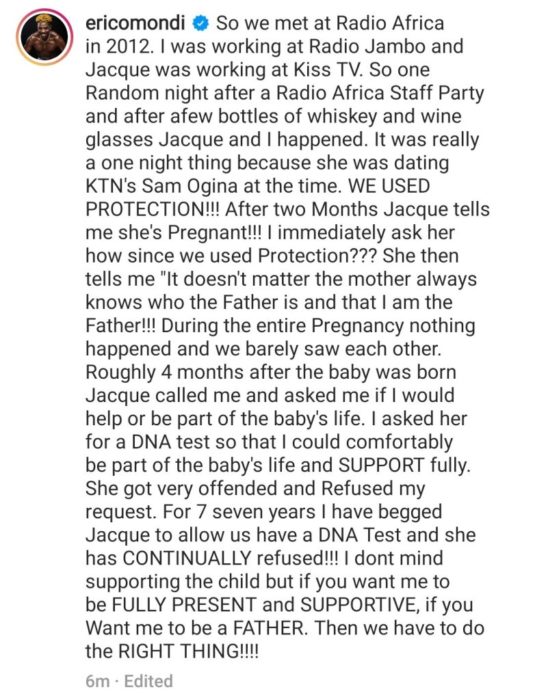 Maribe came out gun blazing stating that at the time he was in a relationship with his wife Njeri.

I Sam Ogina wish to categorically deny the allegations by Eric Omondi that i was dating Maribe in 2012.   What he posted is false and defaming and let he rest assured that i am coming for him. At the time i was dating my lovely wife Njeri.

Public Figures Who Have Been Betrayed By People They Assisted