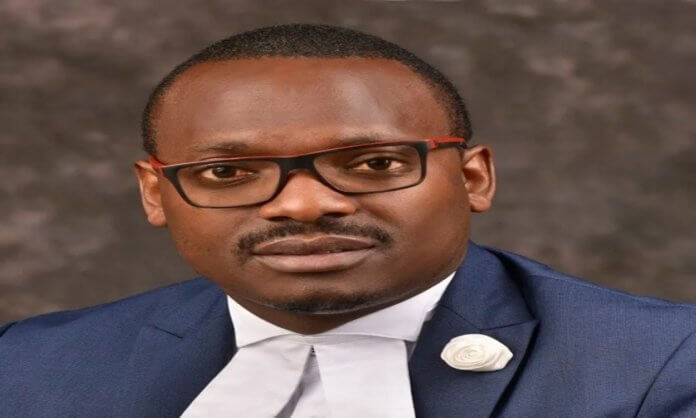 Steve Ogolla is a prominent city lawyer and a political analyst. His journey to the top has not been an easy one. His story best exemplifies the virtues of hardwork, resilience and determination. In the quest to achieve his dreams, the lawyer had to overcome seemingly insurmountable hurdles. Today, he does not believe in rushed success and says that there is no substitute for hardwork and discipline.

Here is his inspiring story as told by WoK.

Ogolla was born and brought up in Ugenya. His mother was the first wife in a polygamous home- he has two step mothers and 18 siblings.

They lived in abject poverty with most of his siblings dropping out in primary school. At times, they lacked food and their mother would buy sugarcane for them to chew for dinner. With all his siblings having dropped out of school, Ogolla, the second last born, had no inspiration of amounting to anything.

The attorney was chosen as the head boy in primary school and did his KCPE in 1997. He was admitted at St. Mary’s Yala and became the first in his family to finish primary and join high school. His parents could not afford the fees prompting his primary school teachers to bail him out by paying his Form 1 school fees.

After Form One, he couldn’t continue at St. Mary’s since there was no money. He stayed with his brother in Kibera. He would borrow notes from other classmates in Form 2. Once again, his primary teachers came to his rescue and paid for him to join form 3 at a day school in Ugenya. In 2001, he did his KCSE and scored B-. To join a public university, he needed at least a B plain.

In 2002, he stayed in Kisumu doing odd jobs. Steve Ogolla moved to Nairobi where he became a hawker. Ogolla hawked calculators and organizers and would walk from Kayole to the city center to Riverside Drive through the University of Nairobi.

Heeding to advice from a friend, he registered for KCSE at a school in Ugenya. He continued to hawk in Nairobi and would read at night. In November that year, he sat for KCSE and scored a B plain. Unfortunately, he missed the university entry point by one mark.

A frustrated Ogolla moved to Mombasa where he took up a number of odd jobs. From off loading ships at the port to selling salad, he did all he could to survive.

At the end of 2004, he moved back to Ugenya. The aim was to open a barber and video shop. His business failed to materialize as he met his schoolmates who at the time were already in university. Hearing their experiences about campus made him realize he was missing out. He thought of a future where his friends would visit the village years later and come to shave at his barber shop. It wasn’t the life he wanted.

The determined young man chose to go to school one last time with the hopes of joining university. He was admitted to Ambira Boys where the principal was unsure of his ability to cope with school after being out for so long.

In his first exam, he scored a C- since he was just getting acquitted with the syllabus. In 2005, he sat for KCSE for the third time and scored a straight A. He says the grade did not come easy and he world read until 1am and get up by 5am.

Steve Ogolla joined Moi University but HELB was not sufficient to sustain him. This forced him to start selling kienyeji chicken.

After law school, he could not join Kenya School of Law since he did not have the needed Sh190,000. He began working at a community based organization in Gikomba until 2012 when LSK called to inform him that he was one of two people chosen to receive the Kenya School of Law Scholarship. This was welcome news but he could not afford fare to go to LSK everyday. Thus, at times, he walked from Nairobi West to Karen.

Luckily, it all worked out and he went on to pursue a Masters in Governance.

Today, he has established a good clientele network and has graced our TV screens to discuss various political issues. He believes in hardwork and in a previous interview revealed that he once spent Sh1.2 million on books while researching a particular case.

The lawyer has handled some high profile cases and represented known personalities and organizations. Steve Ogolla represented LSK in various cases, such as, the case where LSK wanted the president to appoint 41 judges. Another case was governor Julius Malembo election at the court of appeal.

With his improved statue, he can afford to take care of his family. Having grown up in a grass-thatched house, one of the things he did was build his mother a house. He has also been able to support other members of his family. In January 2022, he shared a photo of his mother’s well-lit house with the caption:

“It’s been a long journey punctuated with grace and blessings.”

In an interview with The Star, it was revealed he was a father of two daughters.