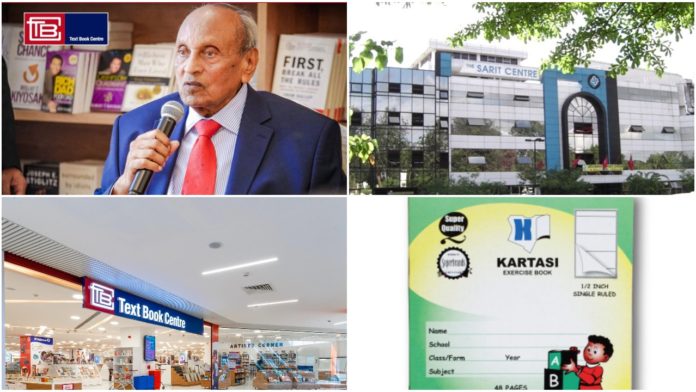 Sarit Center is one of the most popular malls in Kenya located in the suburbs of Westlands, Nairobi. The oldest mall in Kenya is home to different international retail brands, over 250 local retail shops, restaurants and a 300-seater cinema. Despite the mall being popular among Kenyans, the faces behind its huge success aren’t quite popular.

In this article, WoK brings you the story of the billionaires behind Sarit Centre who also own Text Book Centre.

The idea of setting up Text Book Centre popularly known as TBC came in 1963 from two Indian friends Sobhagayachand Vidhu Shah and his close friend Maneklal Rughani who lived in Murang’a and Karatina respectively. Maneklal Rughani was operating Rughani Bookshop in Karatina while Vidhu Shah was running Vidhu Shah Bookshop in Murang’a. The duo saw an opportunity in the education sector since the government at that time was focused on trying to eradicate illiteracy in the country. They teamed up and the two came to Nairobi in 1964 to set up a Text Book Centre – a bookshop that sold education curriculum books and stationery. TBC has since grown to become East and Central Africa’s largest Educational, Cultural and Technological content and Products Distributor.

Also Read: Kariuki And Gurcharan: The Kikuyu And Indian Who Founded Sarova And Hotel Ambassadeur

After the success of TBC, the duo decided to set up a modern mall. This decision was inspired after they visited the magnificent Brent Cross Shopping Centre in London, United Kingdom. They decided to duplicate the same here in Kenya and in April 1983, Sarit Centre was officially born, becoming the biggest mall in the country at the time. It had only two tenants; Uchumi Supermarket and their own business – TBC. It began to slowly grow and by late 1985, most of the space in the mall had been occupied. The mall became the first enclosed shopping mall not only in Kenya but in the entire East Africa.

The Success of the two businessmen

The two businesses became a boom in the country which made them record millions of profits in turnovers. They went on to open Kartasi industries –a company that produces exercise books, writing pads, counter books, box files and document wallets among others. The company has grown to become the leading stationery products in East and Central Africa. In 2000 Vidhu Shah was awarded the Order of the Grand Warrior of Kenya by the government for his contribution towards the quest to eradicate ignorance in the country.

Unfortunately Maneklal Rughani died in 1997 leaving the business empire under the able hands of Vidhu Shah who steered the company into major success until on April 6th 2021 when he also passed on. After his death while aged 84, the family of the two founders have taken control of the different companies.

Sarit Center is majorly controlled by the family of Vidhu Shah with Sarit Nitin Shah as the Chief Executive Officer (CEO), Atul Shah as the Finance manager and Mansur Kasmani as the Operations Manager. The Rughanis family is at the helm of other businesses with Rajesh Rughani as the Managing Director of Simpsons Properties and Soma Group – the holding companies of Maneklal Rughani and Vidhu Shah Business interests. Mahesh Rughani acts as both the Chief Executive Officer (CEO) of Citadel Cellular Communications and Kartasi Industries Limited while Ishwar Rughani is the Managing Director of Text Book Center.

Bitange Ndemo: The Former PS Who Was Abandoned By Friends After Losing Job, Now...