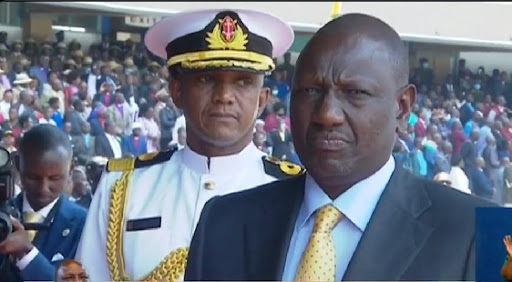 Lt. Col. Timothy Stelu Lekolool was the usual man in a white military uniform always standing behind the former head of state, Uhuru Kenyatta. He was appointed bodyguard and aide-de camp (ADC) by immediate former President Uhuru Kenyatta on July 17, 2018.

From this afternoon, however, Stelu switched to President William Ruto’s side. The move was aimed to signify change of guard to the new President after the instruments of power changed hands from Uhuru to Ruto. Lt. Lekolool saluted and immediately crossed over and stood behind Ruto who was sworn in at 12:45 pm as Kenya’s fifth president.

Lt. Lekolool is a family man and a Kenya Navy soldier. He made history when he became the first Navy officer to be appointed as an ADC in the country.

He is the son of the late Principal Commissioner, Francis Lekolool. He was appointed right after his predecessor, Victor Mburu, left the job to further his studies on matters National security.

Stelu is Uhuru’s third bodyguard since he ascended to power in 2013.

He also accompanies the head of state wherever he goes.

Lekolool is a family man and Kenya Navy soldier who made history to become first Navy officer to be appointed as an ADC in the country.

Brigadier Samuel Macharia was President Moi’s ADC from 1978 after being sourced from the country’s founding president, the late Mzee Jomo Kenyatta.

The late President Mwai Kibaki’s first Aide-de-camp was Lt Col (Rtd) Josiah Mrashui who was succeeded by Lt Col (Rtd) Godfrey King’angi then Njiru who was inherited by Uhuru.