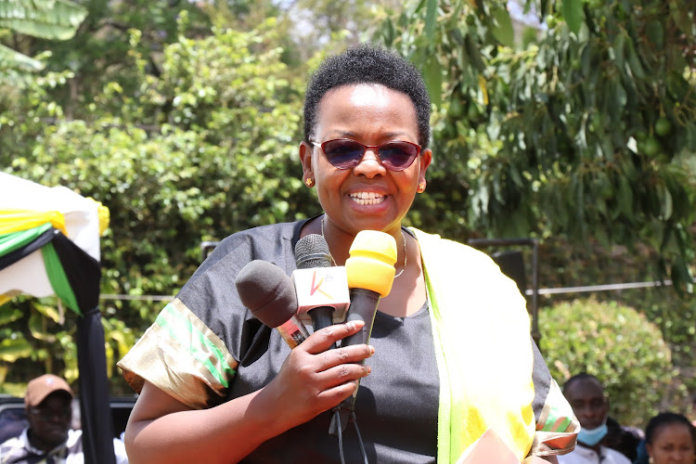 If you were among the millions of Kenyans following the August 9 general elections tallying at the Bomas Of Kenya, then you most probably saw the face of Veronica Maina.

Scenes of her conversing with high profile UDA members and addressing key party meetings and pressers highlighted her powerful position as the winning party’s Secretary General.

Before joining President-elect William Ruto’s UDA party, she was an official at the outgoing Jubilee Party’s administration. She has also worked with a lot of politicians, most of whom quit Jubilee and joined UDA.

Here is her profile as told by WoK.

Other than her duties as UDA’s sec-gen, Veronica is also an Advocate of the High Court of Kenya. She is a graduate of Law from the University of Nairobi, and holds a Law Diploma from the Kenya School of Law.

In her role as UDA secretary general, she is responsible for coordinating the party’s affairs. She also served as the party’s chief agent at the recently concluded general elections.

Prior to her appointment as UDA Secretary General, Veronica held the same position at the outgoing ruling party, Jubilee. In a past interview with Nation, she revealed that she holds her current position courtesy of many people in UDA, including the party leader, President-elect Dr. William Ruto. She worked in Jubilee with a lot of members, who are currently in UDA, further adding that through the support she got from the back end, the party settled on her for the position.

When she joined the UDA party in March 2021, Veronica had previously resigned from Jubilee in December the previous year. She cited the reasons for her resignation as interference from other officials, and she no longer knew her role in the party. In the interview with Nation, she further revealed that during her last days at Jubilee, they were not doing much, not even meetings. That is when she left her position to the current Jubilee Sec Gen Raphael Tuju.

Having worked for at both Jubilee and UDA as secretary general, Veronica has had the pleasure to work with the top most leadership in the country. This is including outgoing President Uhuru Kenyatta and President-elect Dr. William Ruto.

When asked about her experience working with her current boss, she noted that Dr. Ruto is very accessible and easy to work with, adding that he listens to everyone. She also expressed admiration for his hardwork, focus and intelligence.

According to her, the incoming President is a hands-on person, challenging everyone to catch up with his brilliance, further noting that the massive popularity and success of UDA has been because of him.

Cost Of Mitumba To Shoot As KRA Adjusts Tax Tariffs